Headed Into Uncharted Debt Waters, Nobody Knows When US Will Capsize

It’s the great paradox of this supposed recovery. If things have gone so well, if it’s such an economic banner day in the US, why in the world can’t we run the country based on the tax revenues garnered during such boom times?

So many reasons, but the first, most glaring, and painfully obvious is that this administration is cutting taxes while ramping spending. You don’t really need to drill down further than that.

It’s a harbinger of how scary things may get with unemployment at all-time lows and the economy supposing having fired on all cylinders (without inflation running away), with Goldilocks frolicking away for years on end, the United States is currently losing a trillion dollars a year as an ongoing concern.

How much debt can the U.S. government afford? Nobody knows for sure, but it’s pushing the envelope like never before -- or at least more than it has since World War II. 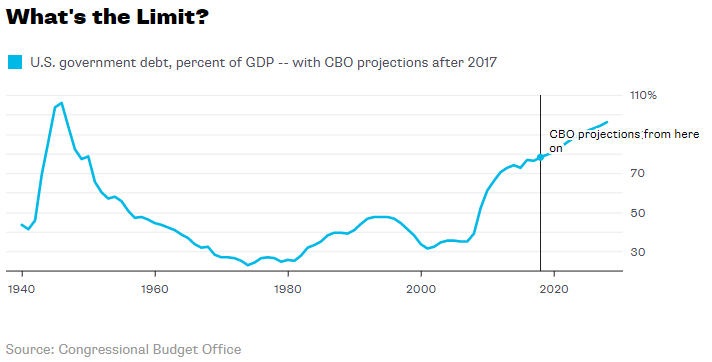 In its latest Global Fiscal Monitor report, the International Monetary Fund offers an admonishment for the world’s developed nations: Use this period of economic growth to pay down some of your debt. Pretty much all are aiming to make some progress, with one notable exception: America.

Thanks to the tax cuts and spending plans Congress has passed under President Donald Trump, the U.S. government’s debt is now projected to reach 96.2 percent of gross domestic product by 2028.

That’s seven percentage points higher than the Congressional Budget Office’s 10-year projection from a year ago, and almost as high as in 1946, when the government had been borrowing heavily to build tanks and planes for the war.

Ultimately, it’s hard to know how much a government -- and the U.S. in particular -- can borrow before things get out of hand. One thing for sure: It’s a limit best left untested.

ORIGINAL SOURCE: America Is Going Even Deeper Into Debt by Mark Whitehouse at Bloomberg on 4/23/18