Higher Inflation Is Coming – The #1 Way You Can Prepare

Ready or not, a higher cost of living is dead ahead.

Many things we buy are already more expensive—gasoline, computers, cars, and houses. And prices won’t cool off anytime soon, since manufacturers are reporting shortages of raw materials… shipping container costs have tripled over the last year… and many commodity price charts look like a Bitcoin chart.

Investors are taking notice, too… measures for inflation expectations have spiked, Google searches for “inflation” are at the highest level since Google’s inception, and a number of prominent analysts and economists have issued warnings.

It seems clear that we’re about to enter a new “inflation era.”

If that’s the case, how does one prepare their finances? How bad could it get? And won’t the Fed keep it under control?

This article covers five inflation realities that are about to materialize. They’re all based on history, and will directly impact both your wallet and portfolio.

The first reality is that a higher rate of consumer inflation is already baked in. I’m not referring to the rise in commodity prices or the pinch in the supply chain—this is something bigger…

History shows that excessive 1) debts and 2) deficits cause inflation to run.

That’s not me saying it. Carmen Reinhart and Kenneth Rogoff showed in their comprehensive book, This Time Is Different, that… 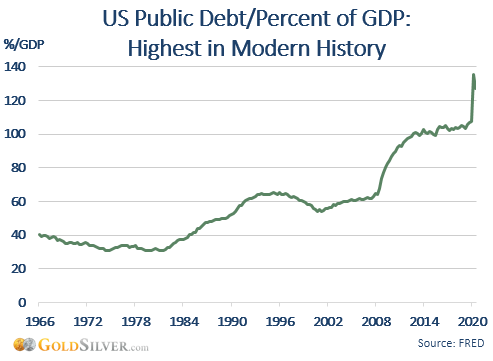 At the end of 2020 (the most recent data available), the federal debt registered 127.3% of our GDP. It has never been this high in modern history.

In other words, US debt as a percent of GDP far exceeds the 90% threshold that research shows ultimately leads to inflation.

The second comprehensive study comes from Peter Bernholz, who is widely considered the leading expert on the link between deficit spending and hyperinflation. In his book Monetary Regimes and Inflation, he concludes: 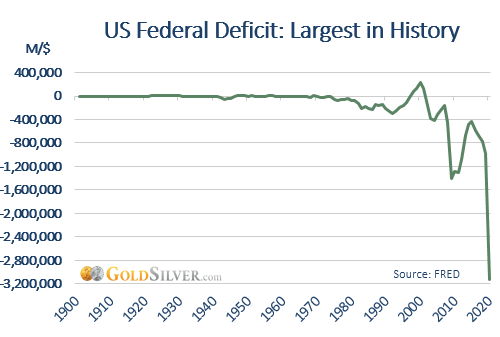 The US Federal deficit has never been this big in recorded history. It’s more than twice the level of the Great Recession.

This data show that the hyperinflation Bernholz warns about is a distinct possibility.

These studies present clear and direct evidence that we should expect higher price inflation. We have met both criteria for a substantial rise in consumer prices.

Here are the other four inflation realities, which include the #1 way to prepare…

The second factor is that inflation can overheat quickly. And once it starts to boil, it’s hard to contain.

This is based on history as well. And it definitely isn’t confined to some mismanaged third-world country—inflationary shocks have occurred in the US multiple times.

Most historical studies on inflation only go back to the 1970s. But as Mike Maloney has always said, the further back you go in history, the more you can learn about the future.

Research from Amity Shlaes, an author with an impressive bio, highlights several examples from the past 100 years when US inflation soared to alarming levels. Even more startling is that those inflationary spikes occurred within just two short years. 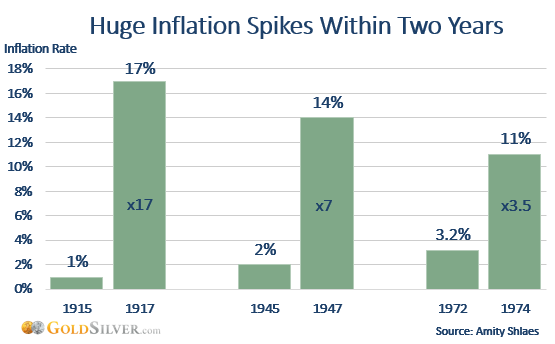 If we matched any of those prior rates, here’s what inflation could look like by the year 2022, based on the recent CPI reading of 1.7%. 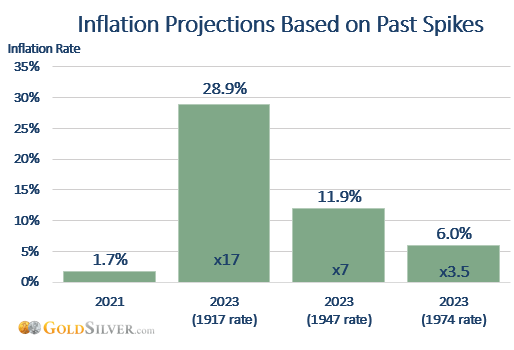 Inflation Reality #3: Most Investors Have No Experience with It

The last time we had soaring inflation was the 1970s and early 1980s. The average age of a hedge manager today is 51, so they’ve had no experience dealing with rising inflation.

It’s probably fair to say that most investors today don’t know what inflation is like on a personal or professional level. And how well would the Robinhood crowd handle it?

Even the least of the increases noted above would catch most people off guard; when’s the last time North Americans lived through a soaring inflationary environment?

The reality is that most people won’t be prepared for it financially or emotionally.

But won’t the Fed step in if it starts to move higher?

No. They want higher inflation. Their reaction to a reading above 2% will be, “Hurray, our policies are working!”

They announced their new inflation policy last August—and have reinforced it many times since—that not only will they tolerate higher inflation but will actively seek a rate above the 2% target.

In other words, their goal, at least initially, will not be to reduce it. You’ll be left to your own solutions.

How will consumers and investors react to all this? Since most haven’t had to deal with rising inflation in a long time, they’ll be caught off guard. Panic is also a distinct possibility.

The conventional wisdom is that these investments can offset rising inflation, and there are studies that show they can serve as potential inflation hedges over very long periods of time.

But we’re not talking about what to buy and hold for decades—we want to know what to buy now, on the cusp of a jump in the cost of living.

Will they work this time?

No investment happens in a vacuum, so the best way to answer that question is to look at the present context… I’ll let you judge for yourself if you think these investments will be good inflation hedges given where they are at this point in time. 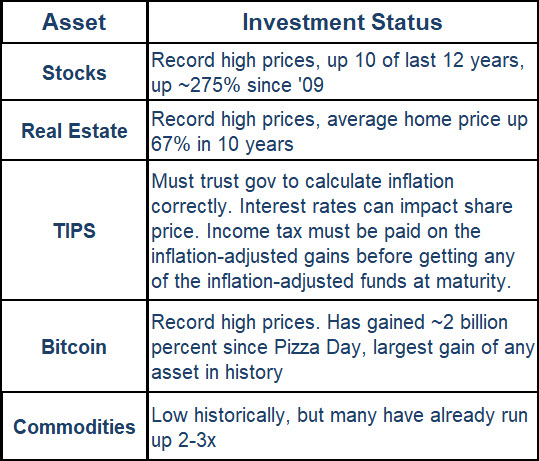 Given how much these have all risen (and that the CPI is biased downward which affects TIPS), it’s unlikely they’ll provide the level of inflation protection they may have in past spikes.

And of course bonds are horrible investments during periods of rising inflation, as yields are at or below rates of inflation.

None of these appear to offer the most ideal solution at the present time.

So what is the #1 investment to protect against inflation?

While other investments might work, these two are proven.

As monetary metals, gold and silver respond directly to monetary issues. And inflation is definitely a monetary issue, since rising inflation means more currency units will be required to maintain the same standard of living.

Silver responded directly to higher inflation, even during recessions, falling industrial demand, and stock market weakness. Even just the fear of inflation drew investors in.

I think investors seek it out again when reported inflation begins an earnest rise.

I don’t pretend to know the precise timing, but if this evidence makes you think you need to prepare for inflation too, make sure you’ve got a sufficient amount of gold and silver to withstand it.

And since these things always overshoot, we’ll likely profit on them as well.