Predicting a 40% stock market crash seems like a bold call in this day and age. It's far too easy to forget that peak-to-trough, the Nasdaq cratered 80% over the course of 31 months from March 2000 to October 2002.

At the time, anyone who suggested such a complete rout was in the offing for the "new paradigm"/"this time it's different" market was quickly and loudly derided as a bitter Chicken Little who didn't understand the Brave New Economy.

As usual, when mass consensus is overwhelmingly bullish and almost nobody can remember a world where stocks do anything but melt up over time, mass consensus was dead wrong.

Guggenheim's head of investing sees a tough road ahead for the market and economy, with a sharp recession and a 40 percent decline in stocks looming.

Scott Minerd, who warned clients in a recent note that the market is on a "collision course with disaster," expects the worst of the damage to start in late 2019 and into 2020.

Along with the decline in equities, a rise in corporate bond defaults is likely as the Federal Reserve raises interest rates and companies struggle to pay off record debt levels. 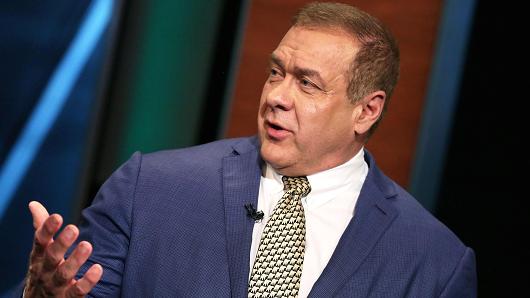 "Defaults are going to be concentrated in corporate America, where in the past downturn they were basically focused in areas of consumer activity," he added.

From there, Minerd figures the Fed will get involved, going back to the quantitative easing policies that helped pull the economy out of the last recession and pushed a surge in stock market prices but also coincided with lackluster economic growth.

"All that will do is defer the problem into the future and allow excesses to continue to build and the collision course that we're on will just come later and probably be worse," he said.

ORIGINAL SOURCE: Guggenheim investment chief sees a recession and a 40% plunge in stocks ahead by Jeffrey P. Snider at CNBC on 4/2/18