The US Best-Case Economic Scenario is Decades-Stagnant Japan’s?

An aging population that, to an ever-greater degree, does not contribute economically. A government lacking any will whatsoever to face the simple mathematical impossibility of its commitments.

Japan “solved” this problem by abandoning any pretense of fiscal sanity. A country run by a central bank run amok. As of last year, the Bank of Japan owned 71% of all Japanese-listed ETF shares. One unhinged buyer who is buying for reasons other than trying to make money doth not a market make.

Interfere as long as you can, as much as you can, and pretend 2+2=5. Welcome to the global central bank mandate. 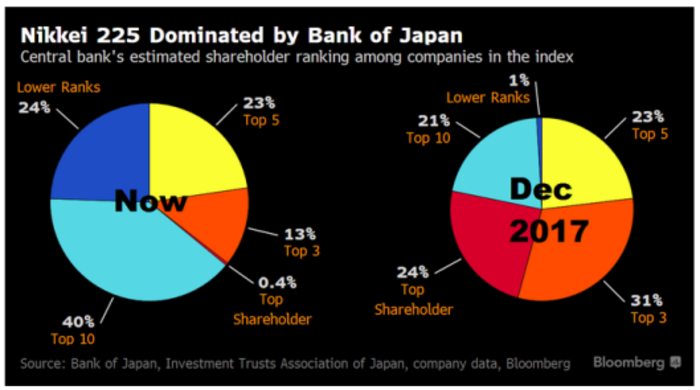 The Congressional Budget Office has officially weighed in on the cost of the Trump Administration’s fiscal policies, estimating that the recent spending increases and corporate tax cuts signed into law by the president will add a cool $2.7 trillion to the deficit over the next ten years.

Investors treated the news as it has other evidence of Washington’s growing fiscal irresponsibility in recent year: with near total indifference.

Indeed, the 10-year treasury yield has actually fallen since the president signed his most recent deficit-ballooning measure, a 2-year budget deal which increased government spending by $300 billion with no offsets.

In other words, the conventional wisdom is that United States is headed for a future that looks a lot like Japan’s: one in which social spending on retirees drives budget deficits higher, but also one in which low interest rates make the resulting debt loads manageable.

ORIGINAL SOURCE: Sowing The Seeds Of The American Debt Crisis by Christopher Matthews at Dealbreaker on 4/10/18