What a Gold Shock Could Look Like: Institutional Investors Start Buying

I once asked my institutional investor friend, who used to work at Goldman Sachs and has been a gold owner for many years, what would make him buy more bullion. Without hesitation he said, “When the price breaks out.”

Well, as is clear to the world, gold has broken out of its long-term trading range.

My friend is not alone in this sentiment of waiting to buy an investment until it’s rising. Institutional advisors, brokers and managers sit on the sidelines until a dormant asset class comes alive and establishes an uptrend—then they jump in.

With the recent uptrend in the gold price, it’s time to look at what kind of cash could come into the gold market from these types of investors. Institutions will want exposure. Not just because financial and market risks are higher, but because gold can net them a profit.

It’s not just me saying this. Look what CPM Group stated in their 2018 Gold Yearbook (emphasis mine):

Only 2% of hedge funds currently have any gold in their portfolios. Further, the majority look at computerized and technical signals to tell them when to buy—by any reasonable measure gold has given them that technical signal.

So what kind of cash could enter the gold market?

Hold on to your coffee mug, because the numbers you’re about to see are staggering.

We tallied the Assets under Management (AUM) for some of the most common institutional investor groups. Here’s how much each category has, compared to the total known amount of above-ground investment gold, along with 2018’s investment demand. 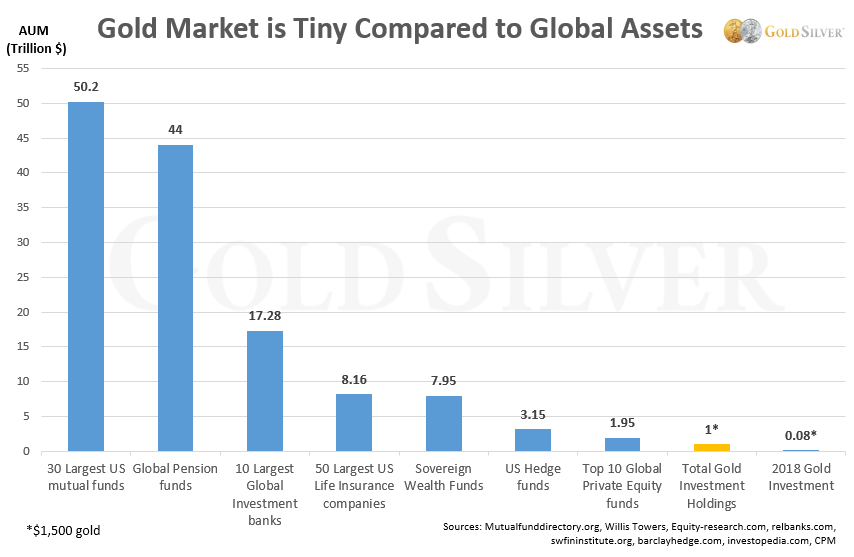 The amount of assets under management from these investor groups dwarfs the amount of investment gold bought all of last year.

It also trumps the total amount of known gold investment holdings. But that figure is deceiving, because in a bull market most investors will be buying gold, not selling. In other words, not all of those ounces already in circulation will be available for purchase. Some of these investors could spark a bidding war, pushing the price higher and higher, but the more accurate figure to use is the amount of annual new metal that is available for sale (the last bar).

So how much gold might institutions want to buy? A general rule of thumb for fund managers is that for an investment to be relevant to the fund, they should invest a minimum of 2% of its assets in that industry.

You can probably see where I’m going with this: there’s not enough gold for these groups to invest 2% of their assets. And that chart above isn’t even a comprehensive list of institutional investors.

Here’s an example… the largest asset management company is BlackRock, with over $6.84 trillion under management. If BlackRock put 2% of its assets into gold—$136.8 billion—it would gobble up every ounce of investment gold last year (coins, bars and ETFs) and still have $83 billion left over (at $1,500 gold). This is from one institution!

Of course more than one institution will want exposure. If these groups want to buy gold, here’s what 2% minimum would look like, and 5% for those that may want more, along with the percentage they would gobble up of last year’s investment demand.

Table corrected from original version, where demand multiples were understated

The pension fund industry alone would buy more than 10 times all of 2018’s demand.

If these institutional investors as a group wanted 2% exposure to gold, it would be 31 times more than the amount of gold that went to investment last year.

There’s clearly not enough to go around. 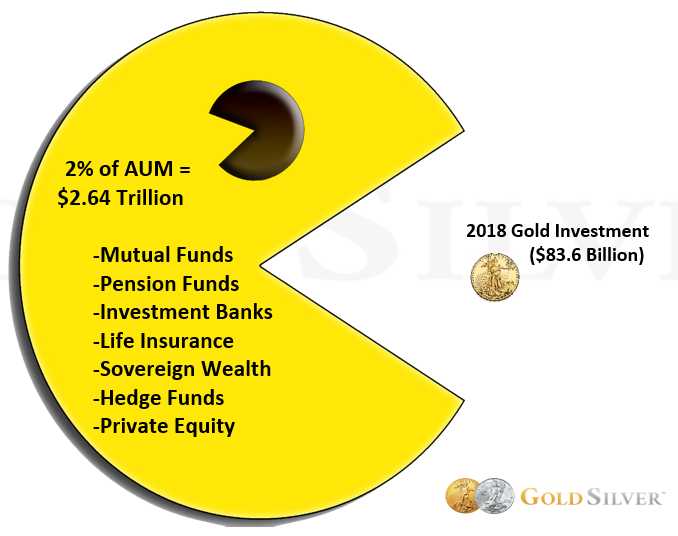 Not every fund will want gold, of course, and some couldn’t (a dedicated bond fund, for example). But the reality of the situation is very clear:

The Coming Gold Shock is Not Far Away

None of this will keep them from trying, of course, especially as gold climbs higher and higher. Most of these institutions already expect higher prices. And just since we penned that article a few weeks ago, there have been more bullish comments from these groups:

The point to all this is that there’s not enough gold for these investors to buy. And keep in mind these institutional entities have armies of analysts, millions of customers, and trillions of dollars… even just a small tidbit of cash entering the gold market could ignite it like we’ve never seen before. And the higher the price goes, the more they won’t be able to ignore it and will want to exposure.

The good thing for you and me is that we already own gold. We’ll benefit from their rush to the party. My advice is to make sure you’re positioned to fully take advantage.

What Can Be Gleaned From Comparing Japan and the US?: Econimica

The Threats To The Bullish Thesis Have Grown: Lance Roberts

Utah Governor Declares State of Emergency Due to ‘Civil Unrest’

Already in Financial Meltdown, Lebanon Endures Blackouts of Around 20 Hours a Day

Will Western Economies Be ‘Turning Japanese’ After Covid?
More News