Did you know you can blow a bubble within a bubble? It’s a fun thing for kids. What’s not so fun is that the stock market is doing it right now. And when another crash occurs, this dual-bubble scenario could make it harder to get out before other investors.

First, let’s take a look at the bubble within a bubble.

This Market Has FAANGs

Today, the US stock market’s total capitalization, to a nearly unprecedented degree, is dominated by just a handful of companies. Commonly referred to these days as FAANG stocks (Facebook, Apple, Amazon, Netflix, and Google parent Alphabet), these shares have been on a multi-year tear and have lifted most of the market, as measured by the Nasdaq and S&P 500 indices, on their own. Throw in Microsoft and these 6 stocks represent almost a fifth of the S&P 500’s total market capitalization: 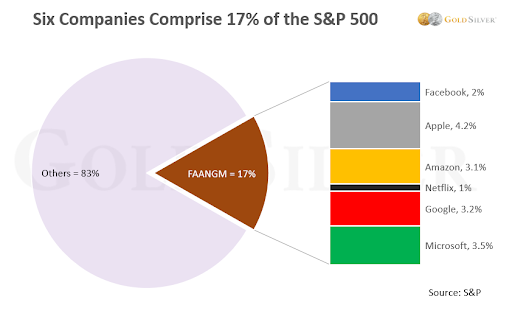 Apple alone is so big that at the end of last quarter it was roughly the same size as the bottom 106 companies in the index combined. This is the bubble within the bubble.

The obvious problem with having such a small group of stocks comprise so much of the market’s overall weighting is that dramatic declines in a single company’s stock could take the whole market down with it. Further, if the market as a whole begins to fall and the selloff becomes widespread, these stocks could rapidly exacerbate the decline since so many investors own so much of them.

This situation is reminiscent of the dotcom bubble, when a handful of tech stocks dominated the stock market (think Cisco Systems, Intel, and Microsoft). Their freefalls led to panic selling of other stocks, and vice versa, in a vicious cycle.

This process is then exacerbated by the forced selling of shares investors purchased with margin debt. It’s difficult to overstate the level of risk margin buying poses; in addition to charging high interest rates on the borrowed money, their brokerage lender can sell their stock anytime it falls below a certain threshold. Which often tends to happen in the blind panics that define market crashes. And as Mike Maloney recently showed, margin debt is at an all-time high. 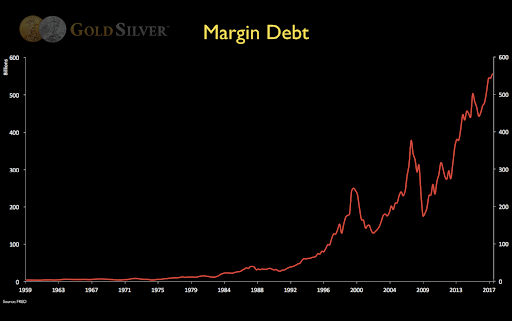 This is a highly vulnerable position for a stock market to be in. It will make any decline or crash worse than it has to be. But it’s only part of the problem.

Are You Part of the Herd?

I winced writing that subtitle, because no one sees themselves as part of the herd. But if you own any equities, including a mutual fund or ETF, your investment portfolio is automatically part the stock market herd.

That’s because today the vast majority of market transactions are executed by robots. Two kinds in particular: the algorithms that drive high-frequency trading and the automatic purchases that underpin index investing.

Estimates generally attribute 75-85% of total trading volumes on any given day to automated sources of some kind, including: 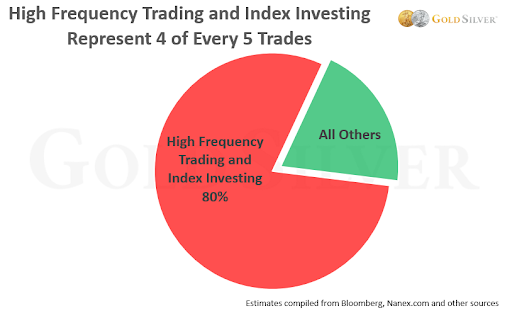 With something like 4 out of 5 trades on any given day coming from HFT bots or index funds, your individual trade is clearly in the minority.

HFT trades are typically done in fractions of a second. You and I, on the other hand, can’t sell faster than we can blink.

This can cause obvious problems in a selloff.

First, in the event of a crisis, one possibility is that if enough HFT bots are programmed to sell to protect against losses it could easily push the market down further and faster than if humans were making the decisions. A minor correction could be magnified because algorithms can react in virtual nanoseconds.

Second, liquidity could be impacted. Think October 2008, when everyone was a seller and almost no one was a buyer. If the market were in freefall, how many buyers would step forward? Index funds are an obvious source, as the new dollars that pour into 401(k)s and IRAs every month don’t change often. But in panic mode that demand is easily outstripped by massive selling elsewhere, as we saw in the last major crash. Is the continued enthusiasm for index funds enough to stabilize the markets a decade further in? Unlikely.

Now, don’t write me off as paranoid. I’m by no means the only one thinking about this. Liquidity is actually a huge concern of the big banks these days. Here’s what they’ve stated publicly over the past couple months.

In a market driven not by humans but by computers and algorithms, selling could be automatic, quick, and merciless. It could drive markets down by double-digit percentages faster than the blink of an eye. If it does, you won’t get out before other investors in a stock market crash — you’ll get out with them — and only after the algorithms, which may well have caused the crash in the first place, have already sold.

And don’t think you’ll just jump into bonds. They too are bought and sold largely through HFT and index investing. Ditto commodities and currencies.

What this tells us is that even though things are subdued right now, the stock market is in a very precarious position. So much so that not only could another 2008-type waterfall decline occur very easily, but the additional risk factors outlined above have set the stage for a much larger, faster, truly unprecedented collapse.

How would gold react in another stock market crash?

We’ve shown before that gold’s returns have been historically positive during most of the market’s biggest crashes. In other words, we’ve seen this movie before, so we can use the past as a guide.

Through the October 2008 crash, gold did initially fall with all other markets, losing about a third of its value in just one month. But, it was not because investors didn’t want gold. It was due to the overwhelming and sudden need for liquidity. Gold was sitting in accounts, ready and available for investors to use to shore up their liquidity needs, just as it’s designed for. And that’s what investors did: sold their gold, along with other assets, to raise dollars for margin calls.

As liquidity stabilized, roughly a month after the crash started, investors flooded back to gold seeking safety. The short-term, knee-jerk selling was overpowered by investors resetting their portfolios, adjusting asset allocation, and generally looking for a safe haven against any further turbulence.

As a result, despite the short-term dip, gold ended the year up 5.5%. The crisis essentially kick-started another bull market elsewhere as capital sought calmer waters to sit out the great sorting of bad from good. Most other asset classes remained at the bottom of the waterfall (real estate, stocks, and bonds, all of which were flying high going into the year, ended it way down).

If we see another 2008-style crash, it is possible the gold price could temporarily fall again. Automated trading might even exacerbate this. This is one reason we recommend investors also keep some cash on hand, to load up on more bullion in the event of a sudden, sharp selloff.

But no two crashes are identical, and the precarious nature of our financial situation today screams at us to hold gold and silver now. In my opinion, it would be careless to not buy precious metals today because they might fall in a crash, with all of the real risks staring us in the face. It’s just as likely investors will be scared into gold in response to a crisis.

Mike Maloney has painstakingly shown that a crash is inevitable. “The Everything Bubble” as he’s dubbed it, is quite real... and the bubble within the bubble could make it nastier.

We can’t tell you exactly when the crash will occur. But we can tell you how we’re preparing for its subsequent fallout: by accumulating physical gold and silver.

Dalio Says 'Cash Is Trash', Have Gold in your Portfolio

Gold Is a ‘No Brainer,’ David Rosenberg

"This is Insane": Doug Noland

Trump Says He 'Could Get Used to' Negative Interest Rates