Central Banks Double Down on the Mistakes of 2008... Creating the Greatest Bubble in History

The common consensus in the financial community today is that the Fed and other Central Banks have somehow managed to end the business cycle. The result of this is that we’ve entered a period of sustained growth (albeit low growth) that will continue in perpetuity until something magical happens and stronger growth returns.

On the surface, this argument is embarrassingly naive. And it is astounding that grown adults actually believe it.

The Fed and other global Central Banks are largely being run by academics with zero real world experience. For centuries leaders and their advisors have tried to generate perpetual growth. None have succeeded. So the idea that this current group of Central Bankers, isolated from the private sector for their entire careers, somehow understand economics better than any other group of humans in history is a ludicrous.

We don’t even have to look back far to see where this ends. A mere 15 years ago, the financial world believed that Alan Greenspan was an economic genius who had brought the world to an era of the New Economy in which we saw non-stop productivity gains.

Today we laugh at the ignorance of this. Not content to have created the since largest stock bubble in financial history, Greenspan doubled down on his foolishness by creating a housing bubble that was three standard deviations away from historic norms.

The fact that he handed off that mess to Ben Bernanke (another ivory tower economist with zero real world experience) before it nearly took down the entire financial system is the greatest accomplishment of his career.

And yet, today, a mere decade later, the investment community has fallen for the same nonsense. Ben Bernanke is hailed by mainstream media outlets as The Hero (!!!) because he, like Greenspan, has doubled down on his idiocy and created yet another bubble… this one in an even more senior asset class (sovereign bonds).

Bernanke, also like Greenspan, has handed this mess off to Janet Yellen, who, like her predecessors, has zero real world experience in the private sector. And yet, she is now sitting atop the largest asset bubble in financial history.

Today, the bond bubble is over $60 trillion in size. This alone means it is more than FIVE times the size of the US housing bubble. Moreover, this bubble is global in nature, with 30% of global bond yields in negative territory thanks to Central Bank meddling.

All told, the bond bubble is now $199 TRILLION in size. It is over TWO times the size of global GDP. And because the Fed never bothered to actually crack down on the derivatives markets (the securities thank permitted the housing bubble to become a systemic issue), there are now $555 trillion in derivatives trading based on bond yields.

This is the greatest bubble in history… seven times global GDP and backstopped by nothing more than monetary printing presses run by the equivalent of an Alan Greenspan in every major economy.

We know how this ends. We’ve been through it twice in the last 16 years alone. And the stock market is already making clear where this is eventually headed. 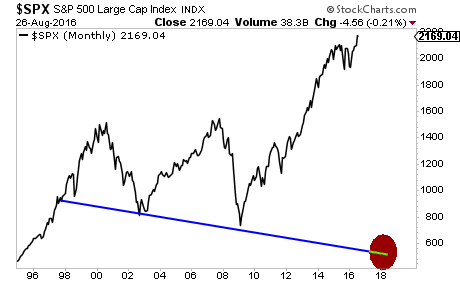 On that note, we are already preparing our clients for this with a 21-page investment report titled the Stock Market Crash Survival Guide.

In it, we outline the coming crash will unfold…which investments will perform best… and how to take out “crash” insurance trades that will pay out huge returns during a market collapse.

We are giving away just 1,000 copies of this report for FREE to the public.

To pick up yours, swing by: https://www.phoenixcapitalmarketing.com/stockmarketcrash.html