Gold and silver often trade in tandem, driven by similar macro forces as they are. Both metals have required resolve and patience through lengthy consolidation periods.

With steadily increasing on-balance volume having ramped now not for days or weeks but years, surging gold interests has not been reflected it the gold price. Yet. As Joseph Granville, the creator of the on-balance volume indictor said, “When volume increases sharply without a significant change in price, the price will eventually jump upward.”

Gold continues to build towards a breakout from a major base pattern, a giant Head-and-Shoulders bottom that we can see to advantage on its latest 10-year chart below. 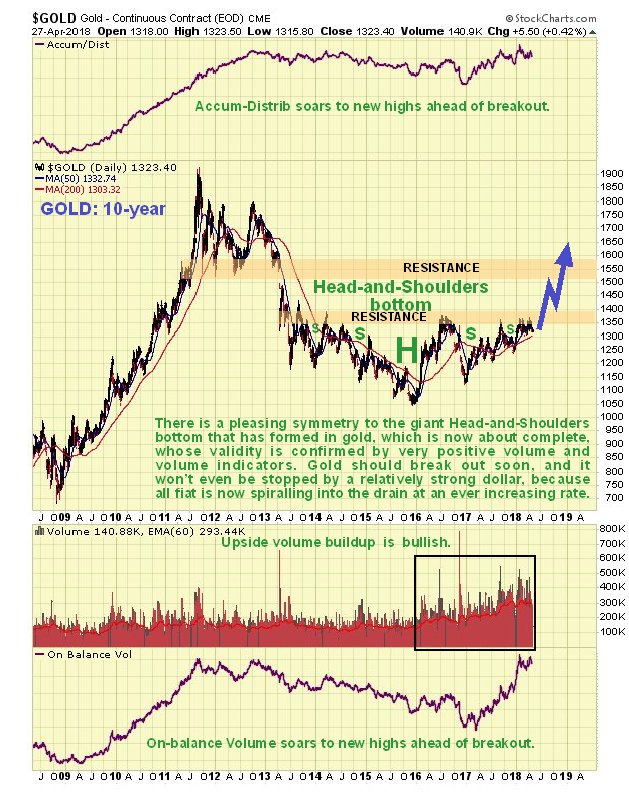 On the 10-year chart it looks like “all systems go” for gold, with the price advancing steadily towards the neckline resistance at the upper boundary of the pattern on greatly increased volume, which has driven volume indicators to new highs, a very bullish sign.

Take a good look at the volume on this chart – it has been expanding steadily since the price rose out of the final bearmarket low late in 2015. Most of this volume has been upside volume, which is why the volume indicators have been advancing strongly and recently advanced to new highs.

This has been going on for WELL OVER 2 YEARS. So do you think that this bullish action for all this time is going to be derailed by a dollar rally lasting 2 weeks, or even 2 months? No, thought you didn’t – me neither.