Wait a minute, consumer credit delinquencies are spiking? Has consumer debt reached such an untenable place that even without serious interest rate hikes, debt bills are already reaching a level where they’re overwhelming significantly more US households?

This is happening, mind you, while debt is still nearly free. Interest rates are still historically low. What in the world happens to these default rates when the coming series of major interest rate hikes makes debt even moderately expensive?

Credit card and auto loans, in particular, have been experiencing accelerating delinquencies. As a result, finance companies/banks have been increasing bad debt provisioning to build balance sheet reserves due to expectations of rising defaults. The chart below illustrates the highest reported net charge-off rates (NCOs) in years. 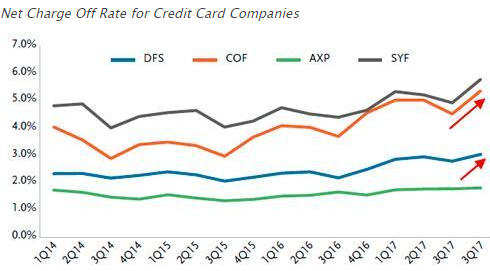 Don’t worry. It gets worse.

It is America's smaller banks - those not in the Top 100 by asset size - that have experienced in just the recent months a surge in charge off deterioration, which at 7.9% is on par with the last financial crisis! In other words, to find where the next consumer credit crisis hides - and will erupt next - ignore the big banks and focus on the smaller ones. 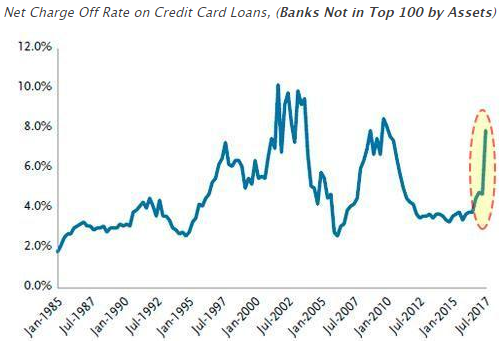 ORIGINAL SOURCE: This Is Where The Next US Debt Crisis Is Hiding by Tyler Durden at Zero Hedge on 2/20/18