Increasingly, the ongoing trade war seems to be less the main event than a prelude to a currency war.

Unless China is willing to simply exchange tariff rounds with the US until they are out of ammunition, given they have so few US imports to tax compared what the US imports from China, they will have to find an alternative weapon.

Currency devaluation is the next logical move.

Trump said in a Twitter post Monday that “Russia and China are playing the Currency Devaluation game as the US keeps raising interest rates. Not acceptable!” 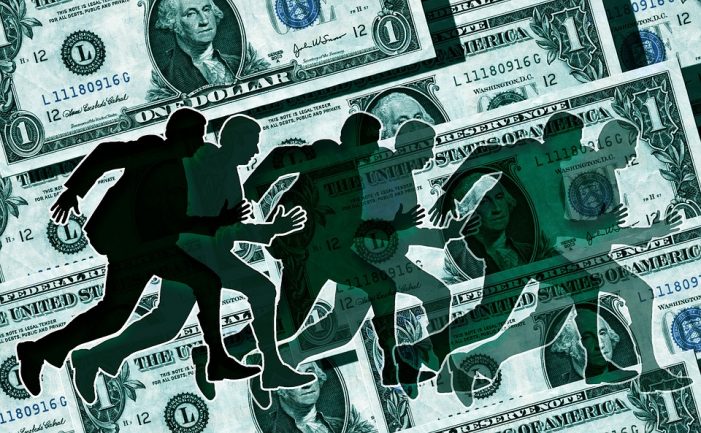 At the core of President Trump’s keep’em guessing Twitter feed was that USD should go down. There may also have been an implicit attack on the Fed included.

The President while singling out the currencies of China and Russia, he has put the Fx (foreign-exchange) market on notice that a race South could be/is on the cards.

The USD Spot index promptly fell the most in 3 weeks.

It is a fact that USD is vulnerable, not because of the views of President Trump, but because of The Trump Administration’s policies.

The Administration has aggressively pursued a policy calculated to increase the size of the US current account deficit. That means that the United States needs to borrow more and more from the rest of the world.

At the same time, the rest of the world is less and less inclined to lend money to the US, and that combination puts pressure Southside on the USD.

The uncertainty over policy could/has reduce international investors’ confidence to invest in the United States, and again pressure the USD.

ORIGINAL SOURCE: USD to Continue in Downward Trend Begun Early in 2017 by Paul Ebeling at Live Trading News on 4/17/18