If there was ever going to be a goldilocks period for consumer debt holders, it should be now. Unemployment is at a generational low, interest rates are still near zero…this is as good as it gets if you like to run a revolving credit balance.

Which is what makes the following all the more staggering: 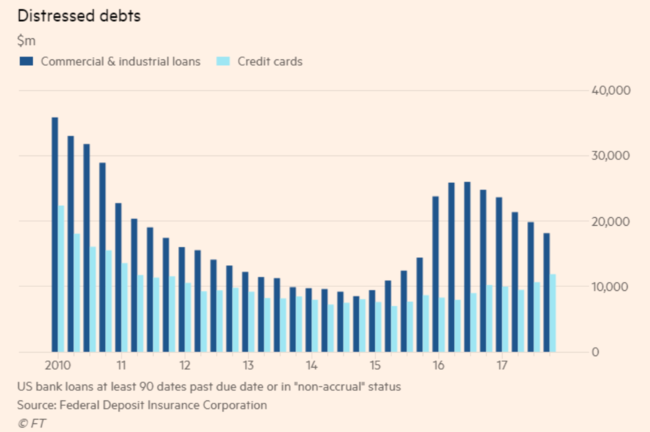 Overdue US credit card debt has reached a seven-year high, underlining the difficulties faced by many consumers in spite of the strong performance of the economy.

Banking sector data show consumers were at least three months behind repayments or considered otherwise distressed on $11.9bn of credit card debt at the turn of the year, a rise of 11.5 percent during the fourth quarter. More Americans are also falling behind on their mortgages, for which problematic debt levels rose 5.2 percent over the same period to $56.7bn”:

Now add 6-8 rate hikes over the next 24 months and what do you get? A vast acceleration in consumer debt obligations which require unemployment to remain at cyclical lows and real wages to grow faster than debt consumption. The message: It has to be different this time, or the math doesn’t work. And if you think unemployment will remain at cyclical lows forever be my guest, but there is precious little evidence that this will remain so.

And if unemployment picks up at some point you’ll have millions of consumers in high debt with limited savings and rising debt obligations. And then suddenly debt matters.