DiMartino Booth: Next Recession, The Fed Will Be Out of Bullets

Danielle DiMartino Booth worked at the Fed for nine years. She understands the decision-making process and the conflicting aims it is charged with shepherding.

So when she says the Fed is up the creek without a paddle, listen. Whatever new paddle the Fed fashions out of the fiscal policy detritus it will have left at its disposal is going to be a marvel of creativity and desperation.

Danielle DiMartino Booth knows the Fed from the inside. And she sees inflation that the Fed will act against. 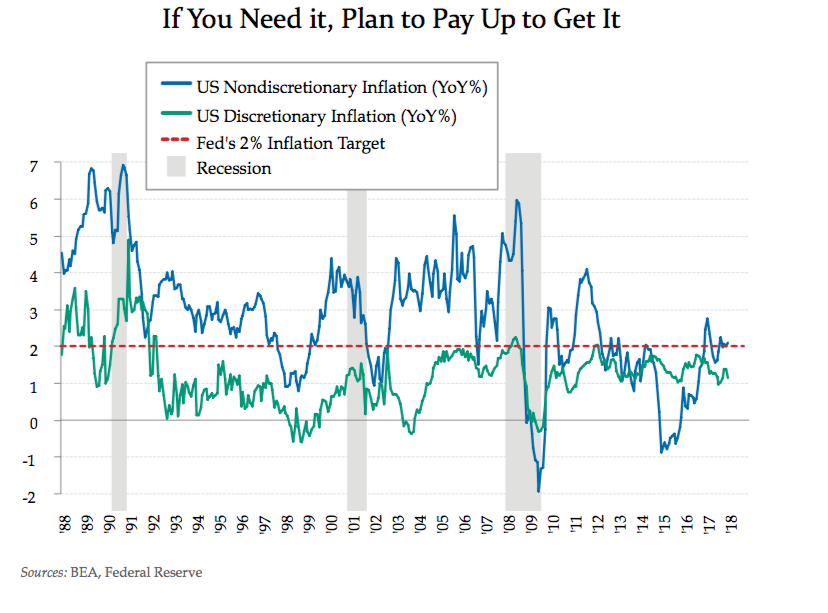 It is imperative that Powell get his Committee on board with recognizing that inflation is an immediate threat before it’s too late, which is not yet the case. Focus in on the blue line which is barely above the Fed’s 2% target.

That represents nondiscretionary inflation – the prices of what you have to buy to put food on the table, stay healthy and keep the roof over your head. The green line is inflation for what you want – another pair of red-soled shoes, a bigger curved-screen TV, tickets to the Final Four – you know, discretionary spending.

In recessionary times, the prices for what you need completely disconnect from the prices of what you want – that’s why they are miserable times for the economy.

It’s no secret that home prices are choking off buyers though rising mortgage rates are doing a bang-up job of getting the hesitant to rush to buy. Applications to buy a home are at a seven-year high even as home prices are up 5.9%, triple the rate of inflation. That helps explain why first-time homebuyers made up all of 29% of buyers in February, a level disturbingly close to the cycle’s 26% record low.

Danielle’s concusion: “If the sensible man in Powell has no wish to ever allow interest rates to fall to the zero bound on his watch, he might want to get the fed funds rate above 2% before the economy hits recession.”

Her conclusion that the Fed will be out of bullets at the next recession makes sense to me. The last time the Fed was out of bullets was last cycle, after 5 1/2% of cuts. It did three rounds of QE and one Operation Twist.

What the Fed does to counteract the next recession is anyone’s guess.

ORIGINAL SOURCE: Inflation Is Building And The Fed Will React: DiMartino Booth by Edward Harrison at Credit Writedowns on 4/5/18