ORIGINAL SOURCE: Inflation Tsunami Ahead by Micheal Pento of Pento Portfolio Strategies on 1/24/18

How is it that The Fed has printed such a staggering amount of paper money, with nothing behind it, and inflation has remained tame? How much longer can the US get these seeming financial markets freeride despite untenable debt levels that only continue to rise? Not long.

Given the record $21 trillion of U.S. National debt (105% of GDP) and our escalating solvency concerns, the current 2.6% benchmark Treasury yield should already be much higher than the historical average of around 7%. Then, we when you throw in the fact the Fed’s balance sheet reduction increases to $50 billion per month by October. And, when considering the ECB has already halved its QE program, and is predicted to be finished printing money by the end of this year; yields on sovereign debt will soon be rising sharply across the globe.

The setup is clear, yet markets have not so much as blinked yet. When they do, the fallout could unfold shockingly fast and decisively. The likely coming play-by-play: 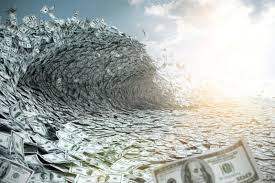