Getting Nervous About the Stock Market? Here’s Your Antidote

If you didn’t catch it, gold has passed the S&P 500 in year-to-date performance.

But what is perhaps more significant is the one-year performance. It just might show that Wall Street is bailing on unicorns and blue-chip stocks and shifting into gold and silver... 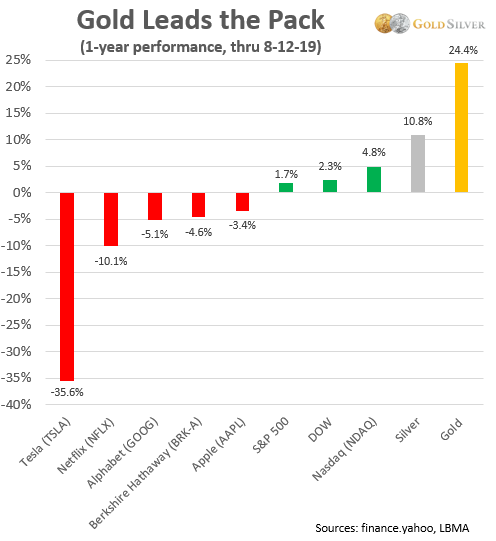 Over the past 12 months, the gold price has risen 24.4%, beating all major stock market indices, along with some popular stocks.

Even Warren Buffet’s Berkshire Hathaway, the stock that famously outperforms the market most of the time, has lost value over the past year—as I tried to tell him, his stock would be better off if he’d bought some gold.

Whether you think a shift out of stocks has actually begun or not, gold has been the King of returns for the past year.

Too Late to Buy Gold or Silver?

So with the recent uptick in gold, and the ongoing wobbly behavior in the stock market, has the opportunity in gold passed you by?

This chart shows the recent “reversal” in the gold/S&P 500 ratio. Can you spot it?

We pointed out last month that the gold price was deeply undervalued relative to S&P 500. Despite the recent jump in gold, the ratio would still have to rise anywhere from three to 11 times to match any prior highs.

In other words, stocks have a long way down and gold a long way up if history were to repeat. You probably know what we think about the likelihood of that.

Viewed from a historical perspective, then, it is clearly not too late to capitalize on the opportunity available in gold.

What about silver—with stocks down and silver up, has the silver/S&P 500 ratio shifted significantly over the past couple months? You might need your glasses for this one… 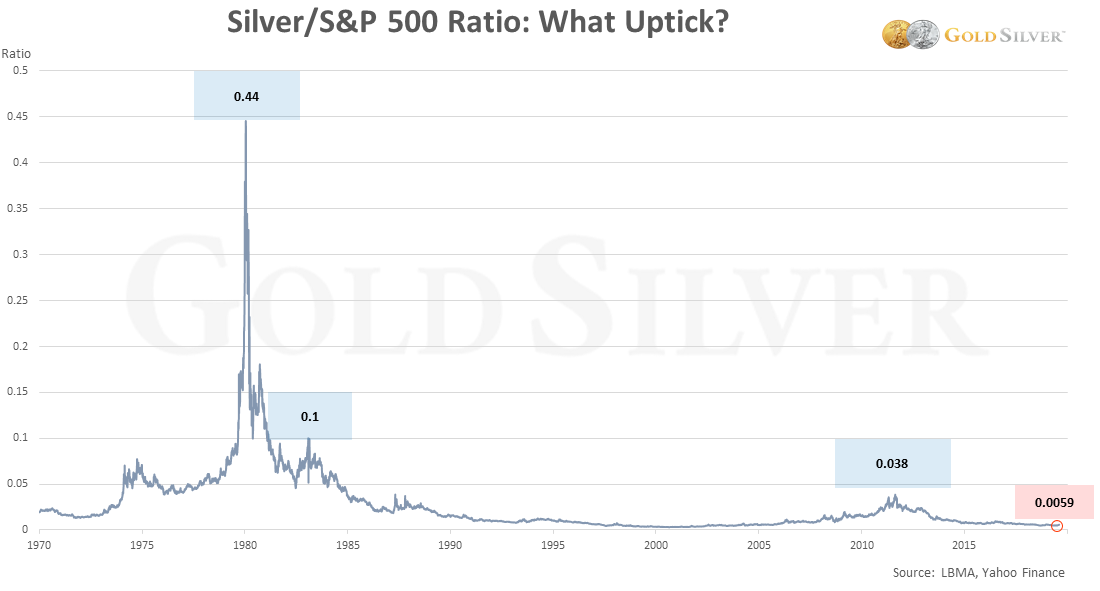 The recent mini-surge in silver and downswing in stocks is barely visible when viewed on a historical basis. As we pointed out before, if this ratio were to return to any of its prior highs, it would still have to rise anywhere from six to 74 times. That implies a potentially ugly bear market for stocks and a breathtaking rise in silver.

And given the current lopsided reading in these ratios, not only is it not too late to invest, the big reward, we’re convinced, is still ahead.