Gundlach Doubles Down on Prediction: $1,000 Rise Coming in Gold Price

Bond King Jeff Gundlach is getting more and more vocal about his certainty that a huge breakout in the gold price is on the way.

Interestingly, in the same talk where he chooses to be non-committal about several topics (“Maybe this level will hold on the 10-year. I’m not in that camp, but my conviction is low. My conviction on breaking above 3 is low. I don’t think you need conviction - let the market prove your opinion.”), he is forceful in his most aggressive call of all: $1,000 upside in the gold price.

Gundlach said that the next big move will likely be in gold prices which have broken their downtrend line, and are on the verge of breaking out to the upside. "It’s getting almost exciting...  something big is happening,” he said cryptically. 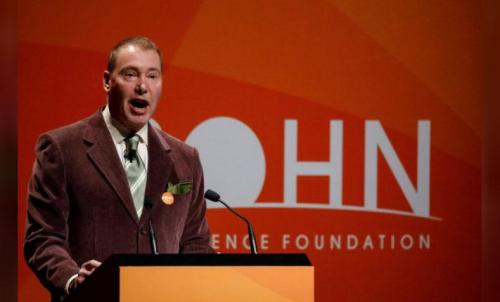 He then revealed his target, saying that based on classic chart reading, an "explosive, potential energy" of a huge "head-and-shoulders bottom" base was signaling a move of $1,000 in gold prices, and added that "Gold is maintaining an upward pattern above its rising 200-day moving average, which is extremely good."

If so, he is right: there would be no inversion; there would be just an epic cross-asset crash, that incidentally will blow up all risk-parity funds in the process.

ORIGINAL SOURCE: Gundlach On Gold: "Something Big Is Happening... It's Getting Exciting" by Tyler Durden at Zero Hedge on 4/25/18