The drumbeat is growing louder. Big, nimble money, that could be allocated anywhere, is being actively positioned for the gold price move to come. The length of sideways, consolidating trading often correlates to the magnitude of the move when it ends.

And the gold price, having exhibited this behavior for years now, is on the verge.

I would highly urge investors to ensure a portion of their portfolio is in a historically reliable store of value—for instance, gold bullion. 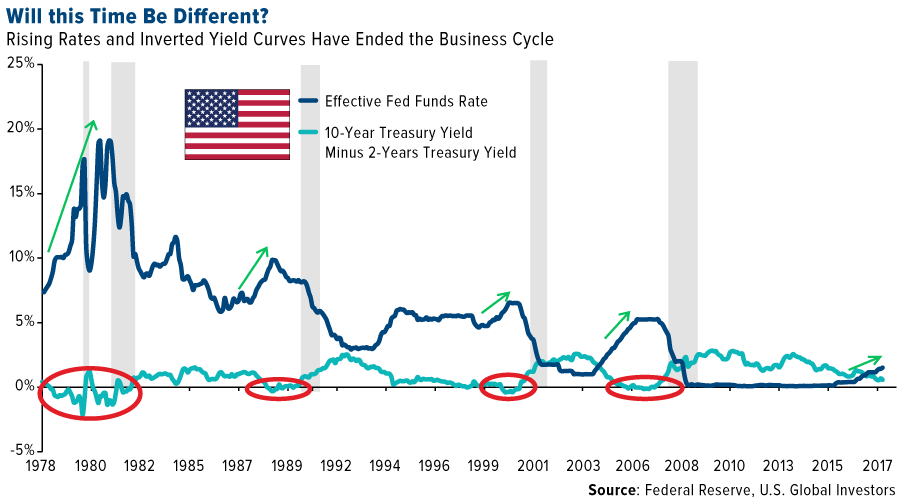 One of the indicators some economists have their eye on right now is what’s known as the flattening yield curve—or the difference between long-term and short-term Treasury yields. When the latter exceeds the former, the yield curve is said to invert, and in the past this has often preceded an economic slowdown.

Recently, the difference between the 10-year and two-year T-note dropped below 50 basis points for the first time since October 2007. And with interest rates expected to be hiked three or four times this year, the yield curve could very well flatten even further.

It could be for this reason, among others, that we’ve seen a huge jump in hedge funds betting on gold. According to Commodity Futures Trading Commission data, money managers increased their speculative long positions in gold futures by 34,928 contracts to a total of 183,080 for the week ended March 27. This represents the most significant jump in bullish sentiment in two years.

ORIGINAL SOURCE: Seeking an Antidote to Global Trade Jitters? Check Out These Buying Opportunities! by Frank Holmes at U.S. Global Investors on 4/9/18