I Owe, Therefore I Am: The Impossibility of Imagining a Post-Debt US

Nobody believes that the US can continue to spend the way it does, while taking in less tax revenue, for perpetuity. Yet there is no urgency to find a plan, let alone an actual plan, to stop this reckless trend leading us headlong into the debt abyss.

In a word, the Fed printed---so they printed. We are referring to virtually every other major central bank in the world, and the mercantilist disease that has spread to all four corners of the planet.

Under this baleful regime, statist rulers and politicians everywhere have empowered their central banks to swap the resources of their lands (the petro-states and resource countries) and the sweat of their workers brows (China, India and like EMs) for US dollar liabilities (US treasury debt and GSEs) in a misguided and futile effort to protect their export based prosperity. 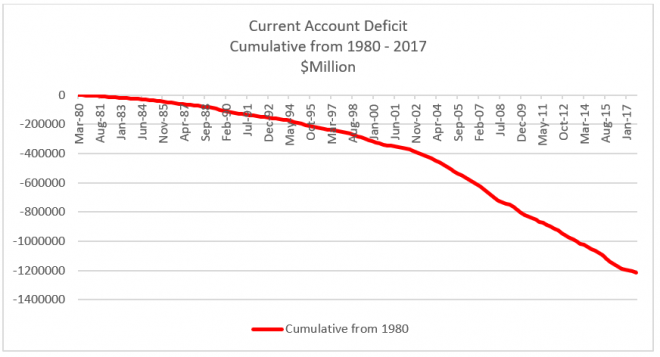 In the middle term, of course, this enabled the US to pull off one of the greatest heists in economic history. We issued debt in fantastic abundance and traded it for their goods and services. Since 1980 this heist has accumulated to $12.5 trillion of consecutive current account deficits; and when you inflate those historic dollars to present purchasing power, the total is more like $19 trillion.

That's right. The US has essentially borrowed the entirety of its current GDP from the rest of the world in order to temporarily live high on the hog.

At length, however, the piper has to be paid. Notwithstanding the temporary deleveraging during the great financial crisis and its aftermath, household debt today stands at nearly 6.0X its 1989 level compared to only a 3.8X rise in nominal wages and salaries.

Alas, the debt card has been played and exhausted as demonstrated by the arrival of Peak Debt in the household sector. In Part 3 we will document how the Fed's wrong-headed pursuit of low interest rates and 2.00% inflation made the American economy increasingly uncompetitive--even as it buried households, business and government in debt. 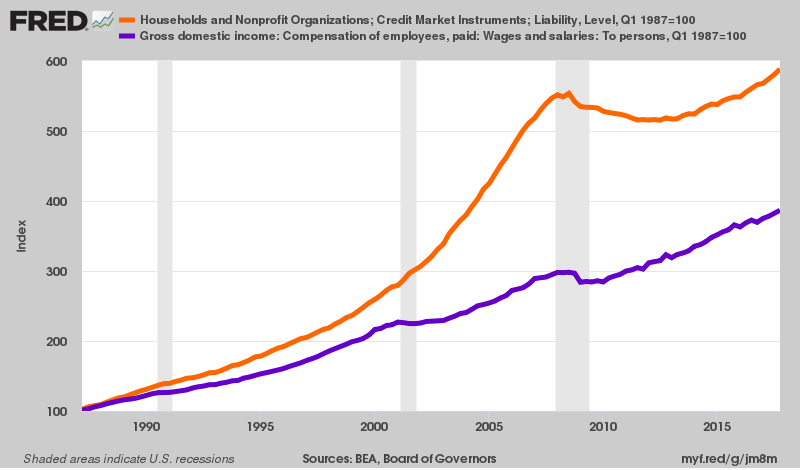 In the face of those deeply embedded structural impairments we are quite confident that today's war of dueling tariffs is just a side show. The real crunch will be far more traumatic because it requires the unwinding of the Great 30-year financial bubble that is the underlying cause of the world's massive trade imbalances.

ORIGINAL SOURCE: Not Your Grandfather's Trade War: The Revenge Of Bad Money, Parts 1 & 2 by David Stockman at David Stockman's Contra Corner on 4/4/18