Feeling cooped up? Tired of lockdowns and shutdowns and your favorite restaurants being closed?

It feels like this will last forever, but sooner or later things will begin to reopen. It will be a new normal, and the process may be rocky, but at some point broad economic activity will pick up steam.

And when the re-openings accelerate, I think the silver price will, in short order, begin to spike, too.

What is the connection between re-openings and a higher silver price? Here’s the link as I view it, see what you think…

Wanna Go To the Store, Dear?

My wife is not a big shopper, but she’d still make the occasional trip to the mall. (She used to ask me to go along, but, well, she knows it’s not my favorite activity.)

Of course these trips have been severely curtailed, or are non-existent. Ditto other trips. I’ve obviously done less shopping and had less outings, too. It’s probably similar in your household. As well as most households around the world.

So here’s the question: what happens when things do begin to reopen? Do you think you might…

I know I will. And my guess is that the 7.8 billion other people in the world might, too.

And when that happens, the jump in spending could easily ignite consumer price inflation. Greater demand will push on existing supplies, and Economics 101 says that can lead to higher prices.

But it’s more than just the re-openings causing a jump in spending. There’s another factor as well: consumers have more cash than ever before… 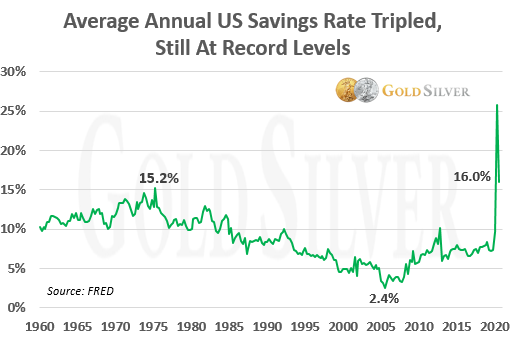 Consumers have more disposable cash to spend right now than they’ve had in over 60 years!

So we have a scenario of an upcoming spending spree, combined with cashed-up consumers.

And don’t look now, but consumer inflation is already heating up…

All of this despite a weak economy and high unemployment! What happens when those things improve? Prices are likely to see even more pressure.

We also have a staggering amount of monetary and fiscal stimulus, all backed by a Fed mandate for inflation.

Last, some Fed officials are already sounding an alarm about higher inflation…

Combine a jump in consumer spending with… record-high cash levels among consumers… monetary and fiscal stimulus, backed by a Fed mandate… inflation signals already underway, and you have a clear set-up for a rise in consumer prices.

You Can’t Handle the Truth

It’s such a famous movie line it’s become an overused cliché, but I think it applies if we get rising consumer prices…

The last time we had serious inflation was the 1970s and early 1980s. The average age of a hedge manager is 51, so they’ve had no experience dealing with rising inflation. It’s probably fair to say that most investors today don’t know what inflation is like on a personal or professional level. And how well would the Robin-Hood crowd handle it?

The Consumer Price Index on January 13 was 1.4% for the past 12 months for the “all-items” index (CPI-U, before seasonal adjustment). The average annual rate over the last 10 years is 1.7%. While prices are undoubtedly higher than what the CPI reports, consumers and investors have been lulled to sleep by a persistently low reading.

But what happens if there’s a spike in spending and the CPI starts to run higher?

A 2.8% CPI would be twice what it is now, yet this could be easily reached based on the sharp rise in input costs we’re already seeing, as well as what is likely to occur when re-openings become widespread. A 3% rate is entirely plausible once it picks up steam.

That level of rise may get uncomfortable for consumers, but don’t expect your friendly neighborhood Fed official to come to the rescue—their reaction to a reading above 2% will be, “Hurray, our policies are working!” In other words, their goal, at least initially, would not be to reduce it. Consumers will be left to their own solutions.

The reality is, a higher rate of consumer inflation is already baked in. History clearly shows this. You don’t have to take my word for it… check out the comprehensive research done by these historians. Basically, excessive debts and deficits—and ours have never been higher—catches up to an economy and causes inflation to run.

Another factor to add in the picture is that once inflation starts to boil it is hard to contain. The historical record shows this as well—check out how quickly inflation has soared in the US. It rose anywhere from 3.5 times to a whopping 17 times within two years.

How will consumers and investors react to all this? At a minimum, concern. But a distinct possibility is panic.

My gut tells me that since most investors and consumers haven’t had to deal with rising inflation in a long time, they’ll be caught off guard.

Where do they turn? While there are a number of things people might do, when it comes to a direct threat of their “money”, there’s one sure asset class they’ll turn to.

Silver responded directly to higher inflation, even with all the economic and market turmoil during these periods. Even just the fear of it drew investors in.

I think investors seek it out again when inflation begins its next earnest rise.

I don’t pretend to know the precise timing, but if this evidence makes you think inflation is coming too, you might want to make sure you’ve got a sufficient amount of silver to withstand it. And since these things always overshoot, maybe even profit from it.