To listen to the Fed discuss policy decisions is to listen to the language of delusion. The Fed would have you think that interfering in markets is a simple affair; push this button and inflation magically taken care of, throw this lever and ‘poof’, no more recession risk.

The reality is that while the Fed can decide how and how much to meddle in the markets, that’s where their power ends. The behavior of consumers and corporations alike is entirely beyond their control, and a reactionary Fed is all too likely to be caught doing too little, too late, to remedy their past mistakes.

Monetary Velocity, an oft-misunderstood metric that quantifies the pace at which money is spent, has recently shown signs of rising after trending lower for the better part of the last decade. Since increasing velocity is frequently associated with inflation, it comes as no surprise the Federal Reserve (Fed) has upped their vigilance towards inflation. 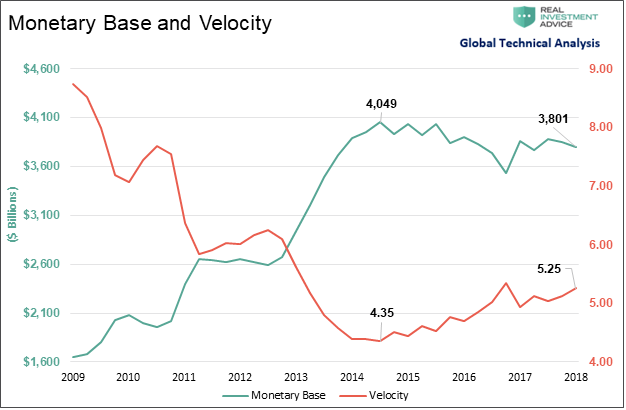 Assuming that further reductions in the money supply, higher velocity and weaker output ensues, we can confidently declare that inflationary pressures will increase. For investors, it is extremely important to be cognizant that such a conclusion runs counter to the popular narrative that slower growth and higher interest rates are deflationary.

We do not want to take too much for granted in assuming the economists at the Fed are aware of these dynamics, but the potential for the Fed and investors to be caught by surprise while inflationary pressures rise is palpable. If the Fed were to be stoking inflation under a belief they are taming it, such an event would be a central banking error of historic proportions.

It is essential to note that the size of their balance sheet is significantly larger than it ever has been. Therefore, sustained reductions in the balance sheet stand to be more significant than anything witnessed in the past.

Given the Fed’s tone, alongside the identity and the factors discussed in this article, the potential for sharply increasing velocity is a distinct possibility. We venture that the equity and fixed income markets will not look favorably upon such an event, nor the increasing potential for stagflation.

ORIGINAL SOURCE: Stoking the Embers of Inflation by Michael Lebowicz at Real Investment Advice on 5/10/18