Madness comes in many forms, and one of them is valuation. There’s simply no way to justify current stock market valuations. They’ve never been higher, by Shiller Adjusted PE Ratio, with one notable exception: at the height of the rocket-ride to lunacy that was the Internet stock bubble. Which ended, you may remember, with an 80% crash in the Nasdaq. 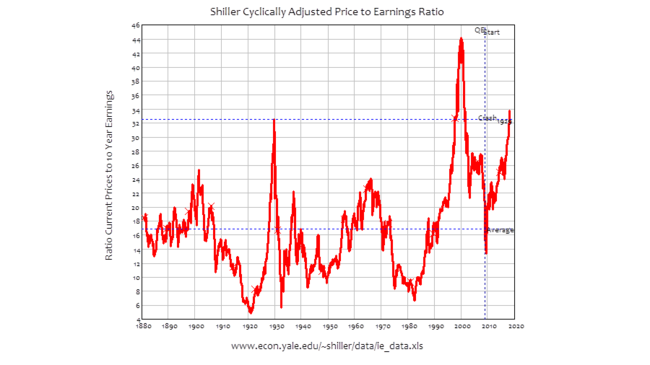 Crashes this big tend to happen when the market is massively overvalued, and on that front this crash is no different. It’s like a long-overdue earthquake. Though everyone from Donald Trump down (or should that be “up”?) had regarded Monday’s level and the previous day’s tranquility as normal, these were in fact the truly unprecedented events. In particular, the ratio of stock prices to corporate earnings is almost higher than it has ever been.

There is only one time that it’s been higher: during the Dotcom Bubble, when Robert Shiller’s “cyclically adjusted price to earnings” ratio hit the all-time record of 44 to one. That means that the average price of a share on the S&P500 was 44 times the average earnings per share over the previous 10 years (Shiller uses this long time-lag to minimize the effect of Ponzi Scheme firms like Enron).

ORIGINAL SOURCE: Why did the US stock market crash on Monday? Blame the central banks by Steve Keen at RT on 2/8/18