It’s human nature. As soon as a crisis has passed without bringing out an out-and-out permanent doomsday, recedes into the past without follow-up and without the enduring systemic changes requisite to stop it from happening again.

The European Debt Crisis was not an exception.

It will happen again.

Europe will go through another financial crisis, probably centered in Greece but not necessarily. It has had several already, because from the start few of the troubled countries have made the fundamental reforms needed to meet their obligations. 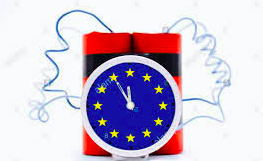 Instead, the richer parts of the currency union, Germany in particular, have advanced funds on conditions of austerity that not only ignore the fundamentals but are otherwise counterproductive.

The recipients pretend that they will abide by German conditions, and Berlin, to duck the disruption of a prolonged financial crisis, pretends to believe them. Rescue loans flow, and then, when another failure looms, the show repeats according to the same script.

It will happen again.

ORIGINAL SOURCE: Europe's Recurring Financial Crisis Has Not, Repeat, Not Ended by Milton Ezrati at Forbes on 3/6/18