Rickards on Hemingway's Perfect Description of Ongoing US Bankruptcy

Brevity is the soul of wit. To summarize something perfectly in as few words as possible. Hemingway wrote that bankruptcy occurs “Gradually and then suddenly.” Four words, and as exactly right as it gets.

The US is so well-inured to the “gradually” part now that aside from bombastic statements, amounting to nothing, from vote-seeking legislators about fiscal irresponsibility, additional billions-then-trillions of unpayable debt lumped onto an already unpayble trillions of debt doesn’t move the panic needle one bit.

The unwind, the crash, the fate of all fiat currency, which we will all have had decades to see coming, will be sudden. And it may well happen far sooner than most think.

Consider the evidence that the U.S. may now be dangerously close to the “suddenly” stage of Hemingway’s bankruptcy scenario after years in the “gradually” stage: 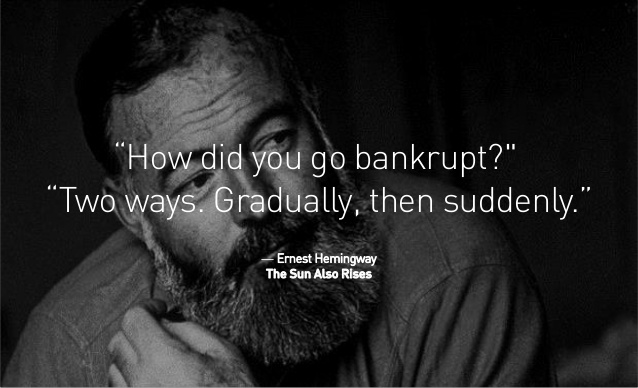 Congress has enacted the Trump tax cut, which blows a $1.5 trillion hole in the budget deficit. The belief that tax cuts will stimulate enough growth to pay for themselves is a sheer fantasy shared by Larry Kudlow, Art Laffer, and very few others.

Congress has also removed discretionary spending caps on domestic and defense spending that have been in place since 2011. At the same time, Congress reinstated “earmarks” that allow members to spend money on pet projects. These two acts will add another $300 billion per year to the U.S. deficit.

Student loan defaults are now running at 20% per year and the volume of student loans exceeds $1.5 trillion, far more than the amount of junk mortgages in 2007, and with a much higher default rate. Covering these losses will add another $200 billion per year to federal deficits for years to come.

The U.S. debt-to-GDP ratio is now over 105%. This is well past the 90% “danger zone” identified by economists Ken Rogoff and Carmen Reinhart. Once in the danger zone further borrowing actually causes growth to decline rather than acting as a “stimulus.”

Russia, China, Iran, Turkey and other adversaries of the U.S. are stockpiling thousands of tons of gold as a hedge against the inflation they expect as the U.S. tries to print its way out of its non-sustainable debt.

There are many other signs that the day of reckoning on the U.S. debt situation is coming much faster than experts believe.

ORIGINAL SOURCE: Is This the Moment of Truth? by James Rickards at Daily Reckoning on 4/10/18

Here Are the 10 Biggest Economies in the World — Before the Pandemic vs. Now