Silver Shock Update: A New and Major Threat to Supply

As many of our readers know, silver supply from mining operations has been in decline.

That decline has just sped up. In a big way.

As you might know, a plethora of mining companies around the world have announced they suspended part or all of their operations. It’s probably worse than we know, as I suspect other miners have curtailed activities even if they haven’t announced it.

This will obviously have an impact on the supply of new metal that gets dug up.

But the situation is MUCH worse for silver. Here’s why…

If you’re not aware, roughly 70% of all newly mined silver comes as a byproduct from non-silver producers each year. For example, a large copper deposit might have some silver in it, which the company will process as a byproduct to help lower their overall mining costs. Most of these mines are base metal operations, but some gold projects also process silver as a byproduct.

This fact has just presented a big problem for silver supply…

As Mike pointed out in episode 6 of Hidden Secrets of Money, a slowing economy means less demand for many base metals. This also puts pressure on their prices, making some projects less economic, which could force executives to slow or even suspend operations. When that happens, the amount of silver they produced slows or stops as well.

The hit the global economy is taking from the Covid-19 has sped this process up. And it’s rather shocking just how much silver is suddenly not getting dug up…

The Great Silver Supply Squeeze of 2020

It’s not just that some miners here and there have suspended operations—in some cases entire countries have shut down, forcing the temporary closure of every mining operation inside its borders. And many of these nations just happen to be where a lot of byproduct silver gets mined.

We surveyed mining operations around the world, with particular focus on those countries where all projects have been shuttered. We then tallied how much silver was produced from each of these countries last year, along with mines elsewhere that we know have closed, and divided that by 12 to get a monthly figure.

This information changes almost daily, but as of March 27 this chart shows the amount of monthly global silver production that is currently offline. 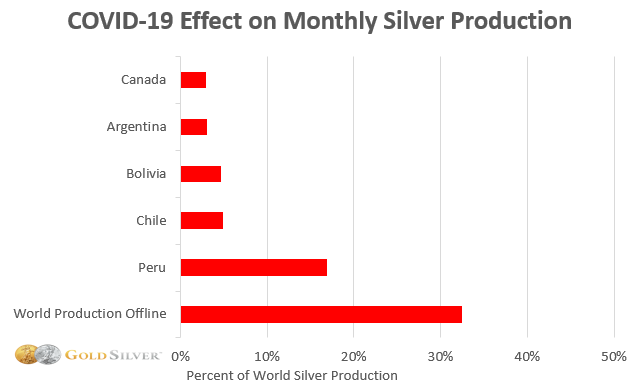 Roughly 32% of all the silver that gets mined around the world, much of it as a byproduct, is currently out of production. Based on 2018 supply figures (2019 data is not available yet), this represents 23.1 million ounces per month.

But it’s worse than this…

Companies operating in China and Indonesia have not publicly reported on their mining operations. However, based on various news reports, we can guesstimate how much production is offline in those two regions.

If we add in estimates from known public sources, here’s how much silver is not getting produced. 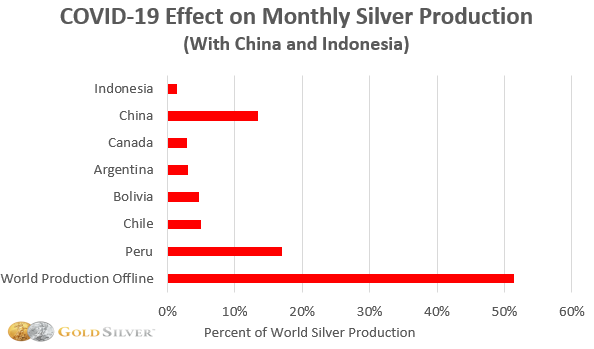 Incredibly, an estimated 51% of silver production is currently offline.

On a monthly basis this equates to a whopping 36.7 million ounces. You can do the math if these mines remain offline for two months… or three months.

As I mentioned, this situation changes almost daily. Maybe some mines in China are back online now, while other operations elsewhere have shut down and not announced it. Mexico is largely still operating, where many primary silver producers are located, so any suspensions there would change this picture as well.

But to the best of our knowledge and estimates, I can report with a reasonable degree of accuracy that…

To Sell or Not to Sell?

With silver prices trading between $13 and $14, many primary silver mines are suddenly unprofitable. Yes, costs are lower with the falling oil price, but many operations were already operating on very thin margins. Even some of the better deposits were having a hard time making much profit before the Coronavirus struck.

If silver continues to trade in this lower range, what will executives do? As the CEO of First Majestic Silver says (full disclosure, I own the stock), “some will refuse to sell their metal at current prices because it would be selling at a loss.”

This would not be a new practice. Endeavour Silver, whose sites I have visited twice, has a history of holding back on a portion of their sales when prices are low. They don’t withhold all their production, but if enough companies begin stockpiling a portion of their output until prices are higher, the amount of metal that comes to the market drops further.

With silver prices significantly lower, some industrial users may want to stockpile metal now. It wouldn’t surprise me at all to hear if Sony, for example, kept buying silver to hoard it at cheaper prices. Ditto jewelry manufacturers. This behavior would eat up more silver now, just when supplies are falling.

It’s true that industrial demand for silver could fall if a recession lowers demand for products that use silver. It may make it harder to get products that rely on silver, too. But the estimated drop in supply already exceeds the perceived fall in industrial demand. And don’t forget that investment demand is the big differentiator—if it continues at its current pace, more metal will be needed, not less.

Can the industry make up the supply shortfall? It the shutdowns last for only a few weeks they'd likely be able to do so. But if they’re offline for several months that would be a hole no amount of overtime could get them, or the industry, out of.

The bottom line is that silver supply is under direct threat. We’ll see how it plays out over the next few weeks and months, but there’s one message that seems clear already:

This has obvious consequences for not just industrial users and jewelry manufacturers, but investors as well. Eagles and Maple Leafs will come back online, but they and every other silver product may not be as plentiful as we were used to. And that’s without the bigger spike in demand Mike sees as inevitable.

As he said in his best-selling book, “just when everyone wants it, it won’t be available.”

I encourage you to continue to get the exposure to silver that you want. My gut tells me that the silver supply/demand shock is just getting started.