Strong, Weak…Call the USD What You Will, There’s Nothing Behind It

It is easy to forget, in this fiat day and printing press age, that the United States used to be on the gold standard as recently at 1971. We used to have to enough gold to stand behind every USD we created.

But a system that requires such rigorous fiscal responsibility requires politicians to make difficult choices that can hurt reelection chances. So now we’re on the infinite-money-supply, just-keep-printing, ‘What could possibly go wrong?’…standard. 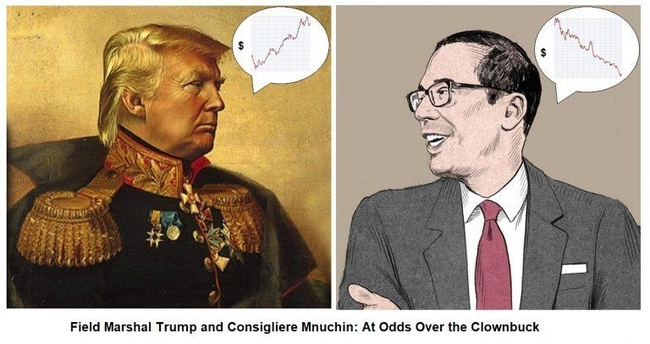 Of course, the entire uproar about a strong dollar versus weak dollar is a sham. When the dollar (and for that matter all other national currencies) cannot be redeemed for either gold or silver, it is inherently “weak” and ultimately worthless. That this obvious fact is not recognized by the Trump Administration, international monetary authorities, and the financial press demonstrates just how unstable the dollar and world currencies actually are.

Sadly, under current ideological conditions, a return to gold money is not on the financial horizon. It will most likely take a collapse of the irredeemable paper monetary system before commodity-backed money is re-established as a general medium of exchange.

It is clear from the recent exchange among Trump Administration financial officers that the same dollar policy will continue, which will lead to an inevitable dollar crisis and certain political disaster for the President.

ORIGINAL SOURCE: “Strong Dollar,” “Weak Dollar,” What About a Gold-Backed Dollar? at Antonius Aquinas on 2/8/18