The Shocking Truth: Give Banks Free Money, They Will Invest in Stocks

So remember when the banking system was on the verge of total collapse? When the banks didn’t have enough money to face the consequences of their own catastrophic decision making so the Fed magically created money, which it then gave them, and everything was okay again?

Yeah. It turns out there are consequences to completely and utterly fixing free markets and expressly prohibiting failure. 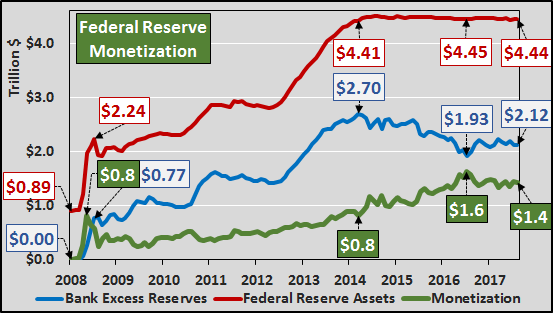 The impact of $800+ billion of pure monetization from late 2014 through year end 2016 was spectacular. In the hands of the largest banks (multiplied by "conservative" leverage somewhere between 5 to 10x's) easily amounting to trillions in new cash looking for assets. A "bull market" beyond belief should not have been surprising.

Give banks an enormous windfall of free money in an environment where fixed income pays next to nothing and guess what? They’re going to find a way to put that money use. Most often in the stock market. Which will drive stock prices up, up, up, and up.

Stocks Could Plunge Even if the Economy Booms: WSJ

What The Boom In Fraud Says About The Current Market Environment: Felder

BOJ to Sit Tight on Policy With Focus on Outlook

“The Smartest Thing We Can Do Is Act Big”: Rickards

Stimulus Is like Heroin, ‘It Doesn’t Do You a Lot of Good Long-Term’: Wall Street He...