Most fights only take place after a lot of verbal leadup. The insults and grandstanding gives both sides a chance to vent, and more often than not, one side finds a reason to stop the confrontation from escalating or a third party steps in.

But what about when it goes the other way? When things ramp up quickly, and then the realization sets in…one guy has a gun, and the other one doesn’t.

In the current trade war, China has the loaded gun. The US has nothing in its arsenal that remotely compares to Chain’s ability to sell US treasuries. If push comes to shove comes to shoot, China can trigger US fiscal catastrophe, at will.

President Trump is piling on massive debts and the U.S. is running huge deficits – this is the time where the Treasury needs someone to buy even more of their debt and bonds. 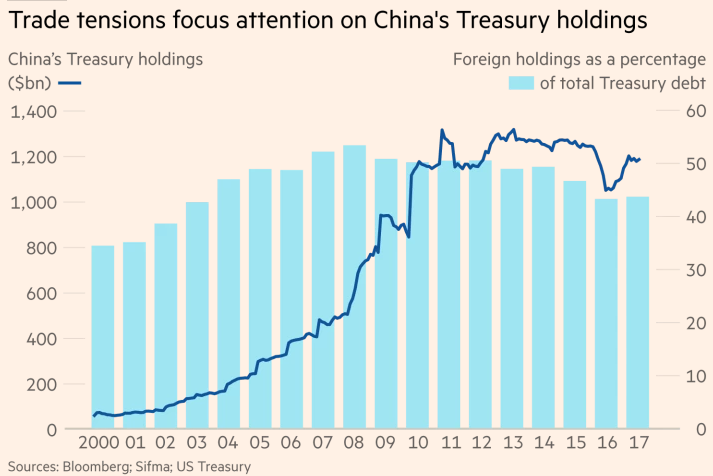 “Investors worry that if China purchases fewer Treasuries, the US government would have to find alternative buyers. That could prompt a rise in the rate of interest it pays and increase the cost of serving America’s vast national debt.”

Imagine if you are investing in a friend’s business. He plans to expand in the short run with much more debt with hopes to jump-start long term growth. But all of a sudden, he gets into a fight with his creditors and the bank who is financing his business.

It’s not a good idea for investors to be putting more money into a business that needs substantially more loans from the very person they’re fighting with.

China has that over the United States – it’s the ace up their sleeve.

All these quick-fired exchanges of tariffs and trade war escalations between the world’s two largest economies is unsettling. Especially that both refuse to back down.

Having gold right now in the portfolio will offset any losses from blowback of a trade war, a collapsing stock market, and a fragile U.S. economy.

There’s a reason China and Russia have been buying and mining huge amounts of gold.

There will be a lot of short term pain – and contrary to what Trump believes – no long-term gain from this trade war. Especially with our largest foreign debt holder.

ORIGINAL SOURCE: Trump Is About To Make Us Gold Bugs Very Wealthy Again at Palisade Research on 4/6/18