ORIGINAL SOURCE: Two of Wall Street's Biggest Names Are Sounding the Alarm on the U.S. Economy by Sabrina Willmer of bloomberg.com on 4/6/2017

Larry Fink CEO of BlackRock the worlds largest assets manager and Jamie Diamon CEO of JPMorgan Chase the largest U.S. bank and third largest in the world appear to extremely worried on the U.S. economy.

JPM's Diamon said that the U.S. has gone it in debt "spending $Trillions on wars and piled huge debt onto students." BlackRock's Fink had one sentence "You’re seeing a slowing down of our economy." Both are on a adviser group panel to  President Trump.

Please read the rest here; Two of Wall Street's Biggest Names Are Sounding the Alarm on the U.S. Economy 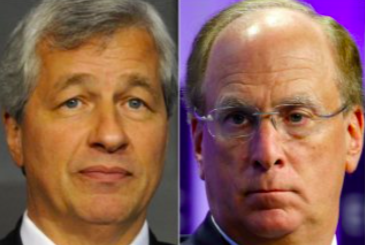