Want to start a recession? Raise interest rates. It’s almost as reliable as hitting a big button labeled ‘RECESSION’. The grey columns in the below graph indicate recessionary periods, and as you can see, they occur like clockwork after a period of rising rates

Recessions aren’t bad. Cyclicality isn’t bad. Downside, market corrections, aren’t bad. They are all part of a free market economy that waxes and wanes, gets overexuberant then corrects, and on and one.

But we have gotten so, so far from that. Whereas the Fed once thought it could pull one little string and induce one little movement in the economy, it is now a baffled puppeteer trying to control a marionette whose thousands of strings are all tangled. And along the way, it has reduced the level at which interest rates do not directly contribute to crisis. 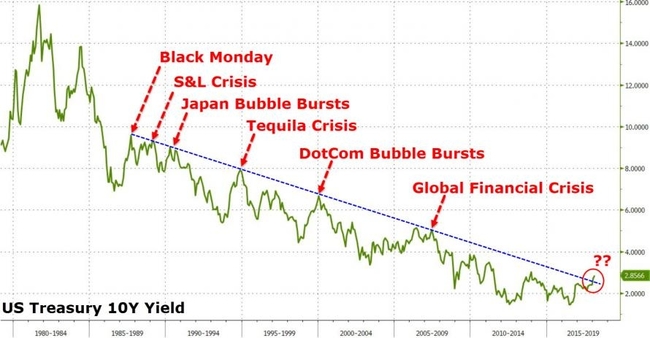 Also, feedbacks don’t come quickly enough to make necessary course corrections. This makes raising interest rates way too much like playing with physics reactions we don’t fully understand. Interest rate increases (like fission reactions) start chain reactions. In an open environment such as the world economy, we have limited understanding of the outcome of these chain reactions.

ORIGINAL SOURCE: Raising Interest Rates Is Like Starting a Fission Chain Reaction by Gail Tverberg at Our Finite World on 2/21/18