What Comes After Trillion? The Federal Debt Death-Spiral Future

The United States national debt is currently about $20 trillion, and the federal government is paying some of the lowest interest rates in history on that debt. The Federal Reserve has raised interest rates five times now, and is publicly considering another seven increases between 2018 and 2020, for a total increase of 3%.

What will be the impact on the national debt and deficits if the interest payments on the debt jump upwards because of the actions of the Fed?

Within 5-10 years, however, maintaining higher interest rates comes at a very high cost as ever more debt rolls over at the new interest rates, and this would have the effect of doubling the interest payments on the debt, while drastically increasing the size of the annual deficits. 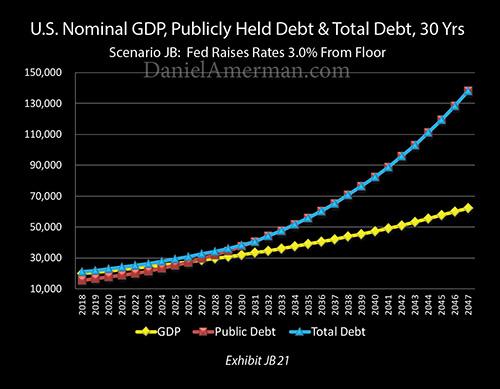 When we go to the longer term of 15-20 years and beyond, the Fed's stated plans would create a financial catastrophe scenario, because of the higher compounding rate of 5.25% versus 2.25%.

As explored in detail in the analysis linked here, the doubling of the national debt created a profound conflict of interest between the government and the interests of retirement savers. The very yields that are traditionally assumed to be available to reliably create wealth for retirement investors - also financially cripple the U.S. government. And the suppression of yields that preserves the financial viability of the government - financially cripples many retirement investment strategies.