Mike Maloney has always said, silver is gold on steroids…

Silver can move 5% or more in a single day.

Unfortunately, it cuts both ways. The silver price has been falling. Watching it reminds me of that commercial, “Help, I’ve fallen and I can’t get up.”

But silver is not a weak and elderly grandmother. It’s one of mankind’s oldest forms of money… it’s a core industrial element with widespread use in our society... and it is a long-standing monetary asset, a fact that will resurface when monetary issues take center stage.

And our readership is well aware of the fact that silver is a tiny market, so it doesn’t take much cash coming in—or going out—to impact its price.

So what gives? Why isn’t silver rising at time when investors expect it to?

There are several reasons that account for the decline in the silver price this year.

The biggest factor is a direct result of the rout in stocks. The selloff has been so violent and unrelenting that there is an overwhelming and immediate need for liquidity. Cash is desperately needed by traders and investors to meet margin calls and offset losses elsewhere.

Combine the selloff in stocks with a crash in oil prices and you get a need for liquidity that is off the charts.

Remember, stocks were already bloated and vulnerable. More importantly, margin debt was at record highs, as Mike Maloney pointed out over a year ago.

As Mike predicted, the extreme amount of margin debt is now coming back to haunt those investors. They’re forced to scramble big-time to meet margin requirements—and they are requirements. In some cases they aren’t even asked to deposit more margin; other positions are automatically liquidated to cover them.

When the global stock market is four times bigger than the global economy, it’s not hard to see that an uncontrollable selloff can force investors to raise cash.

Despite all this, silver has fallen less than the S&P 500, Dow, and Nasdaq so far this year (though Monday March 9).

Investors See an Industrial Metal, Not a Monetary One—So Far

As our readers know, roughly half of silver supply goes to a variety of industrial uses. Another third goes to jewelry.

With an economic slowdown staring us in the face, most mainstream investors understand that slow or no growth would require less metal for these uses. This kneejerk reaction contributes to the selling.

As you and I know, silver is ultimately a monetary metal. Traders and investors aren’t focused on monetary issues when their stock positions are plummeting—but they will be when currency worries ignite.

Traders can piggyback off the decline by pushing prices down further. They can also put on trades designed to take advantage of the volatility and push the price down. While charges have been brought against some of these traders, this activity still goes on.

Keep in mind, however, that not all short positions are nefarious. And those with corrupt intentions will get burned if they try to continue the manipulation when sentiment in this sector reverses.

As Mike has shown, manipulations always fail. They will again.

Could the Selling Get Worse?

It’s always tough to answer these questions, but it’s certainly possible that the selling may not be over.

In the short-term, the more deflationary the environment gets, the more pressure the silver price could see.

In fact, Mike himself said he “hopes” silver falls to the $14 level, so he can buy more. While he doesn’t know if that will happen or not, he knows that big drops can happen in a deflationary selloff.

Think about that… as much silver as Mike Maloney owns, he wants more.

There’s no guarantees we’ll be right about what’s ahead, but our money is definitely where our mouth is.

With all this in mind, you might be wondering…

Could This Be Our Last Opportunity?

No one will know that answer until after the fact, but we are one step closer to a series of major catalysts for silver…

Central Bankers Will Use All Their Tools

The market now predicts the Fed will cut another 75 basis points off the overnight fed funds rate at its March 17-18 meeting. This with the 10-year Treasury already below 0.5%.

Further, it almost goes without saying that some form of QE will continue. And new forms be instituted.

These are their two main tools, and both make silver (and gold) more attractive.

And the worse things gets, the more likely they’ll use other programs too, just like they did during the Financial Crisis of 2008-09. And most of these efforts are inflationary in nature.

In the big picture, these interventions will drive investors toward silver and gold, not away from them.

Confidence in the Fed’s Ability Is Already Eroding

It’s starting to gain traction: the mainstream sees cracks in the Fed’s abilities to successfully navigate the turmoil.

Consider this quote just yesterday from Bloomberg, about as mainstream as you can get.

“Some new financial order, to replace Bretton Woods and the system that Volcker built to replace it, is now needed. A decade of monetary expansion has delayed the issue. It is hard to see how it can be delayed much further. It would be wise to brace for disruption to match what was experienced at the end of the 1970s and the beginning of the 1980s.”

The more this line of thinking gains traction, the more investors will turn to silver and gold. We think that’s exactly what’s coming. Watch for this shift in trend, as that’s when I think the big payoff will start to kick in.

The biggest influence on the silver price is investment demand. 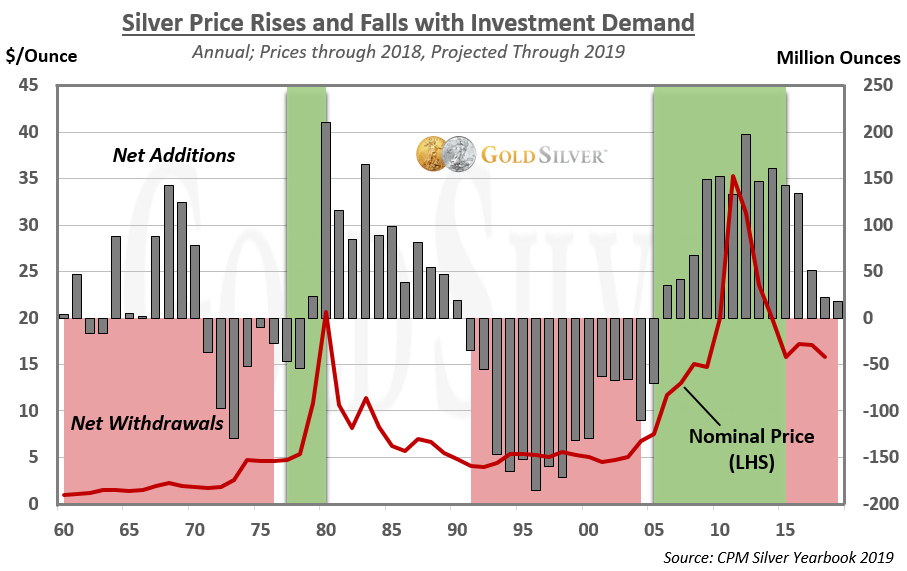 In other words, as investment demand goes, so goes the silver price.

So here’s the question you have to answer for yourself: Do you think investment demand for silver will grow in the future? Or fall?

Your own answer to that question will tell you what to expect ahead. You probably know our answer.

Last, we’ve seen this movie before.

In other words, the selling was temporary. And once liquidity needs had been satisfied, investors rushed back into silver and sent it on one of the greatest rallies in its history.

You may tire of hearing about buying opportunities, but the market doesn’t care what we think. Whether we get a cheaper price in the near future or not, Mike and I and everyone else here continue to position ourselves to profit mightily from what we think will be an epic run in this metal.

What about Mining Stocks?

Some of you have asked about mining stocks. They’ve been beat up much worse than silver, which is typical. Just like silver rises and falls more than gold, silver stocks rise and fall more than silver.

We can’t give individual advice on this topic, but a few things…

First, as Mike and Ronnie Stoeferle pointed out in their video, the miners have been at a historic undervaluation relative to the metals. That undervaluation has only increased over the past few weeks. To me that means the window of opportunity is open wider, not closing smaller.

Second, you must be able to emotionally and financially handle the volatility. I say that because what’s happened to the miners over the past few weeks is not all that uncommon. Sure, the selloff has been bigger than many, but you invested in the stocks because of the leverage they have to the metal. That leverage has worked against us recently, but unless we get a Mad Max scenario and the mining industry completely falls apart, I expect to see the volatility work in our favor in a big way at some point in the future.

Hang in there, friends. It will get not only more critical that we own physical metal, but very lucrative if we’re right.