It’s pretty daring to claim that you’re near certain an investment will pay off.

But that’s exactly what I’m doing. Irrespective of anything you’ve heard from Mike Maloney and his predictions about precious metals, it is my personal opinion that at some point gold (and silver) will inevitably pay off in a very big way for us.

Not only that, this catalyst has little to do with the precious metals market itself. It’s an outside force, one that may have more impact on investment and trading than any other, and will ultimately have a major impact on gold and silver as well.

Let me make my case and see what you think…

What is the entity that cues Wall Street to make investment and trading decisions more than any other? It’s the same one that controls interest rates, money supply, and gives economic guidance.

The Federal Reserve. The central bank of the United States.

More than any other market-moving force, global investors look to the Fed and follow its signals. This includes corporations, institutions, and other governments.

The Fed has incredible sway over the economy. Its decisions impact, directly or indirectly, virtually all segments of society. It affects the economy, the banking system, the financial markets — and you and me as individual citizens and investors.

The Fed’s role is particularly important when a recession or some type of economic crisis looms. Its response to macro financial conditions can shorten a recession or lessen the impact of a crisis.

This sway comes from the tools it has at its disposal. Those tools can be very powerful. And one of them is ‘jawboning’, telegraphing to the markets what its future actions will be.

In one recent example, this past December the Fed made a statement that it had reversed course on interest rate policy, shifting from hawkish (likely to raise rates) to dovish (likely to cut rates). Mortgage rates fell, real estate markets stopped their decline, and stock markets rose. All this and more from the Fed talking. They haven’t actually cut rates at all (yet).

But how effective will this, and then the actual cutting of rates, be when the next recession or crisis hits? Herein lies where my certainty about gold begins…

Lowering interest rates rewards spending and investment, and as a result increases the money supply. So when a recession or crisis comes — or even just anticipatory fear of either — the Fed has a history of automatically lowering rates. After jawboning, it’s reliably their first line of defense.

So that’s what they’ll do when the next recession inevitably arrives, right?

Yes, but there’s a problem…

This chart shows the US Fed funds rate just before every recession over the past 50 years. Compare all those to our current rate. 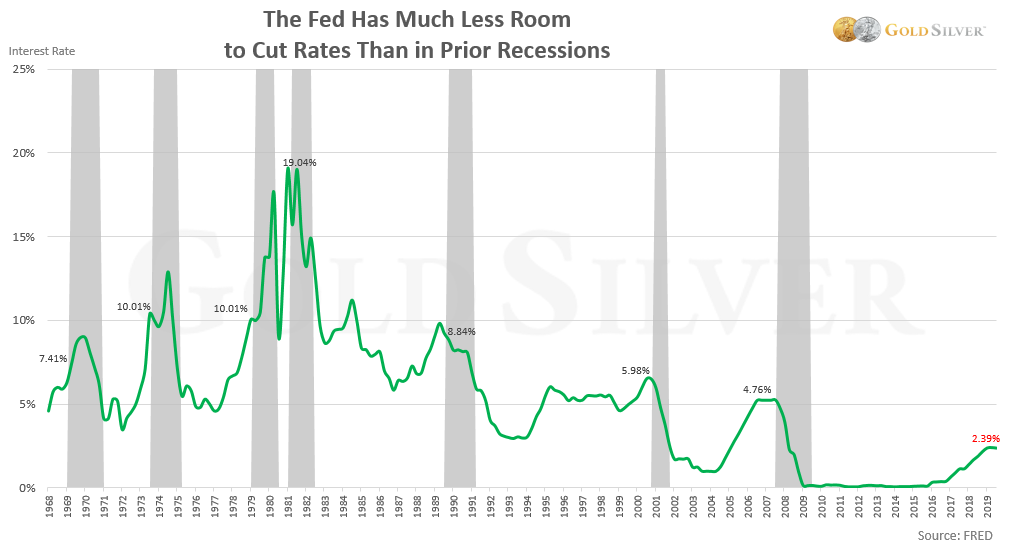 The current rate of 2.39% is the lowest pre-recession rate since at least 1968. It is roughly half the 2007 rate when the Great Recession started.

The obvious point here is that the Fed has very little room to cut rates without getting into negative-rate territory. Their #1 tool to counter an economic downturn has much less anti-crisis antidote than what’s been available in the past. It won’t take much for the almighty Fed to reach zero or negative rates. And that’s assuming they don’t lower rates before the next recession arrives – but traders are now pricing in a 100% chance of at least one Fed rate cut in July. And this is while GDP is positive.

It’s not just the US. Here’s the current rate from the G10 plus Australia. 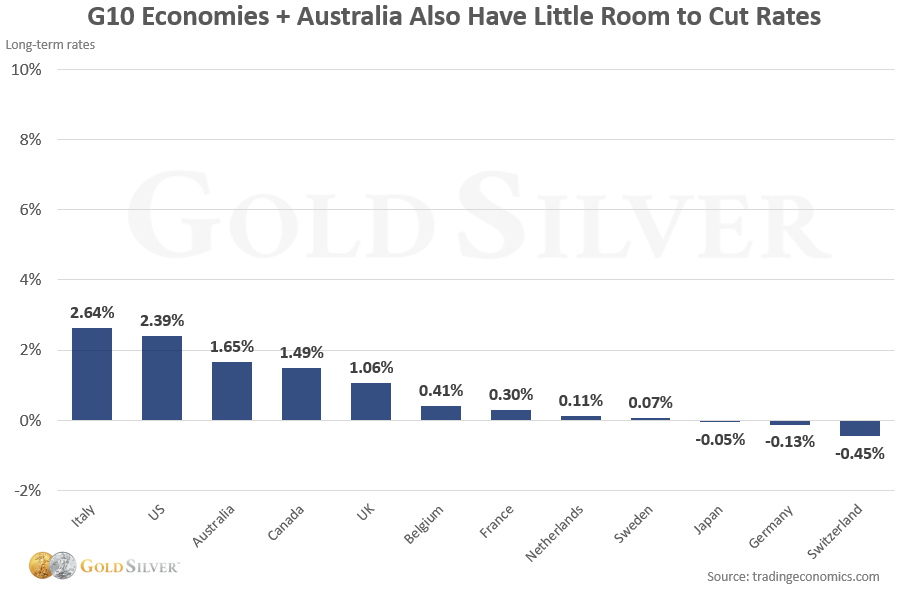 Not only do all of these countries also have very little room to lower their interest rates, several countries are already negative.

But it’s worse than this.

In many countries the 10-year rate is already negative:

The 10-year German bond yield is worth highlighting, because when hit -.32% last week it became the lowest yield on record for Europe’s strongest economy.

Further, the following countries have a 10-year rate that sits below 1%:

These countries will hit zero in no time once the recession boogeyman shows up. Heck, they might hit zero before then.

It’s pretty ugly out there. Last week French and Swedish 10-year yields fell below zero for the first time ever. Nearly 100% of the debt issued by the Swiss government, from one-month to 20-year maturities, now carries a negative yield. It’s a similar situation with Sweden (91% of all debt is negative), Germany (88%), Finland (84%) and the Netherlands (84%).

In total, an incredible $13 trillion in global government debt now offers sub-zero yields, a new record. Those investors are guaranteed to end up with less than the bond’s principal amount if held until maturity.

The Economist compiled a “real” interest rate for the G7 countries (excluding Italy), and look where their estimate currently sits: 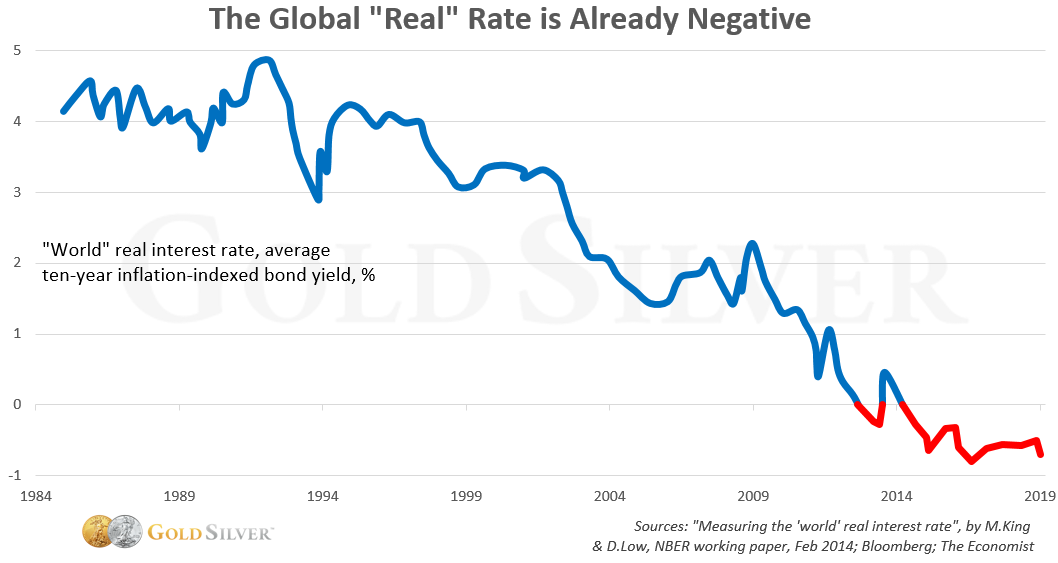 The average real interest rate among the most advanced economies in the world is already below zero.

The bottom line is that…

The Fed will definitely lower rates as we near the next recession, and will continue on that path as the slowdown or crisis wears on. They’ll have no choice. But they’re starting from such a low point, as is most of the world, that the effectiveness of that move will be flimsy and short-lived.

But what if the downturn is of the nature Mike has projected? The “lower interest rate” tool would be used up in the first couple innings. Then what?

The Fed could decide to follow Japan and the EU and introduce negative rates. There’s no indication of negative rates now, but GDP is positive and stocks keep churning higher. But when the next economic slowdown does come, the Fed will quickly run out of room.

They’ll probably want to avoid a negative nominal rate, for fear of the message it would send to the global markets. So before going negative they’ll most likely turn to other drastic measures.

We Can See the Bottom of the Central Bankers Toolkit

Most central bankers have three basic policies to stimulate depressed economies that are used in this order and level of sequential desperation to stimulate: jawboning, lower interest rates, and various forms of QE (outright money printing, and using that money to artificially inflate demand for assets the free market, for whatever reason, doesn’t want – like subprime mortgages 10 years ago). Most everything the Fed says and does revolves their manipulation of these three tools.

Here’s what some of those variations might be in the next recession or crisis, in addition to other actions we can expect from Congress and the administration:

Undoubtedly there will be other tools invented in the next crisis, but they’ll all essentially revolve around interest rates and money printing, and talking about them. Just these three options. And within those options, fewer and fewer alternatives all the time, with less and less punch.

Zero interest rates and perpetual QE are eventualities in my opinion. Actually it’s not my opinion; as our editor Alex Trigaux pointed out, Fed Chairman Jerome Powell recently admitted that 0% rates and more QE are inevitable.

Gold Ultimately Wins — And so Do We

Gold usually responds positively to rates being lowered. In the mainstream’s view, it lowers gold’s “holding” cost (i.e., storage), and it makes the metal more attractive since bond yields are lower. So as this process starts don’t be surprised to see gold rise.

But that’s not why I’m so confident. In my view the major reason gold will experience a potentially life-changing climb is because the Fed’s #1 tool to fight off a crisis or recession has already been compromised so much by past policies that there’s hardly any stimulus left to be found by lowering it. Such a move might help in the current environment, but not in a major economic crisis. If you go to a gunfight with one or two bullets and your enemy has a machine gun, your odds of winning are pretty darn low.

Whether we have negative nominal rates or not in the US, this process will have major consequences for the dollar, and perhaps more importantly, force investors to question their level of confidence in the Fed’s abilities. As the recession and crisis drag on, there will be new supposed economic elixirs created, and some of them might even provide some temporary relief, but they’ll all ultimately be ineffective, because diluting your currency and lowering rates below zero aren’t honest “solutions.” The math doesn’t work, especially when you’re already unforgivably deep in debt and going deeper every month.

And that’s when the biggest potential catalyst for gold sets in; it dawns on the investing public that the Fed does not have the ability to “save” the economy, markets, or its currency.

This is why I’m convinced we’ll win with gold and silver. The US will lower rates and print money because it’ll have to, both of which are wildly bullish for gold. And when the dollar is inevitably printed into oblivion and interest rates fall below zero, citizens the world over will see gold for the real money it has always been.

The bottom line is that the Fed does not have infinite tools or gold-like abilities to effectively combat a crisis or recession. And this growing realization will impact the gold market in potentially life-changing ways.

I encourage you to consider how central bankers will react as we go through the next set of crises, and how effective their actions ultimately can be. Once the Fed reaches the bottom of the toolbox, and this becomes clear to all the world, our investment in gold and silver will pay off in such fashion that all the wait will have been worth it.