It’s a little frustrating to silver investors that it underperformed gold, especially since we all know it’s more volatile.

But history has a message for us. Actually, three messages. And they all hint at the same thing…

Hint #1: The Seasonal Run Has Begun

We averaged the monthly performance of the silver price since 1975. It shows that historically, silver tends to rise from November through April. 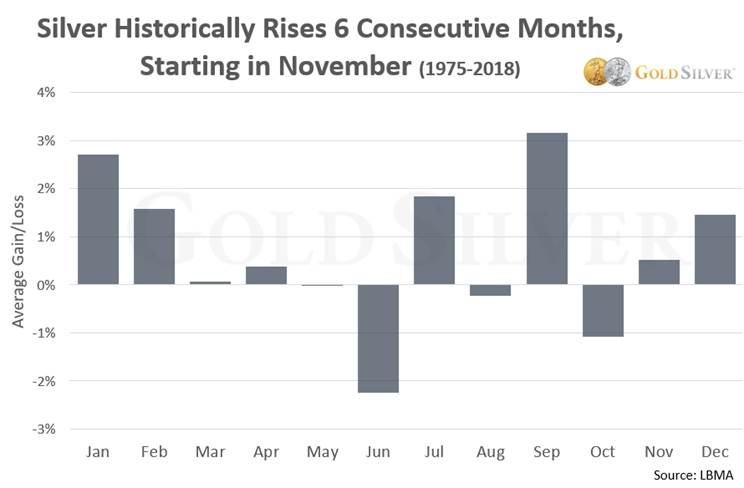 Based on history, silver has likely begun a multi-month run. Time will tell, of course, but silver is currently following the seasonal trend, a good sign.

You’ll notice that June sticks out as a good month to buy, what amounts to silver’s biggest dip of the year. You might think you’ll get a better price then than now.

But that’s not what history suggests…

This chart shows the average gain and loss of the silver price for each day of the year. It confirms the trend above, but more importantly shows that silver’s biggest rise of the year is about to kick in.

On average, the silver price has a strong January and February, its strongest two-month period of the year. It tends to be flat until June, at which point it has historically sold off, ultimately leading to the strongest single month of the year, September.

But the bigger message is that silver tends to end the year higher than where it began. Meaning if you’re a buyer, the best price, at least based on history, would be now, the first week or two of early January.

Our readers have seen this chart before, but it shows that silver tends to trail gold in the early stages of a new bull market in precious metals. This is normal.

What is also historically normal is that silver eventually catches up to gold and surges past it. 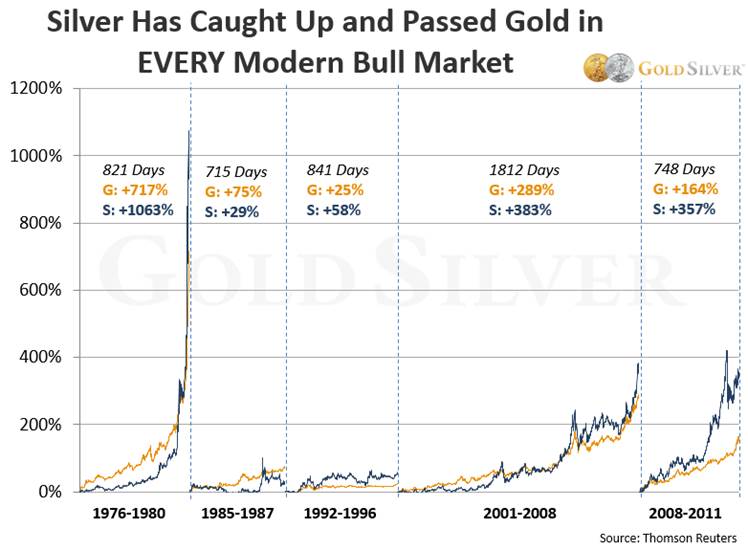 You can see that silver tends to trail gold for the first one to two years of a new bull market. That’s what we’ve seen for the past couple years now, gold leading silver.

But then silver has historically caught up and passed gold. Sometimes it happens quicker than two years, sometimes it takes longer, but history shows that…

So the question to answer is, are we in a new bull market for precious metals? If we are, then history says silver is highly likely to outgain gold at some point in the near future. Which means sub $20-silver could be a thing of the past by the time 2020 ends.

You’ll also notice that silver has had some huge spikes near the end of bull markets. That, too, is ahead for us.

If you doubt we’re in a bull market, or think there could be one more selloff before we’re off to the races, then it’s possible you could fetch a better price later (though don’t forget premiums spike in big selloffs). But that’s a bet we’re not willing to take: not only are there numerous risks with our currency, markets and economy, but silver is already deeply undervalued. For these reasons Mike and I continue to accumulate physical silver.

Only time will tell, but history is whispering in my ear…

If history is whispering in your ear too, I encourage you to continue accumulating physical metal.

Either way, our day is coming, silver bugs. Join Mike and I in preparing for what we believe will the financial ride of a lifetime.