Without Mass Delusion About the USD, We’d Have a Currency Crisis Today

The incredible truth of US fiat currency policy is this: It will go on as long as people believe it is sustainable. The reality is that it is not. But perception, not reality, allows the printing presses to keep churning out worthless slips of paper to which people mistakenly assign value.

Fiat currency is debt that is only as good as the issuer’s ability to make good on that debt. The US has no way to pay the principal of its $20T debt. It only has currency to pay interest on that debt because it creates it out of thin air.

The belief that the US dollar is worth anything should derive from the belief that eventually, the US government will stop printing money, run a surplus, and be able to pay off what it already owes.

If one doesn’t believe this will happen, by definition, they should believe the US dollar will eventually default.

Central banks’ market manipulations have succeeded in fending off credit defaults on a grand scale: Policymakers have cut interest rates dramatically and injected new cash into the banking system. In retrospect, it is clear why these operations have prevented the debt pyramid from crashing down: 2008/2009 was a “credit crisis.”

Investors were afraid that states, banks, consumers, and companies might no longer be able to afford their debt service — meanwhile, investors did not fear that inflation could erode the purchasing power of their currencies as evidenced by dropping inflation expectations in the crisis period. 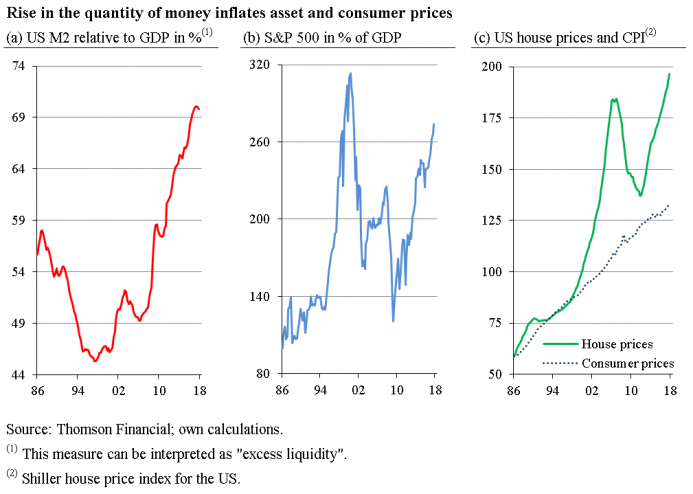 Central banks can no doubt cope with a credit default scenario: As the monopoly producer of money, central banks can provide financially ailing borrowers with any amount deemed necessary to keep them afloat. Cheap and easy central bank funding prompted lenders and borrowers to jump right back into the credit market. The debt binge could go on.

Monetary policymakers’ unprecedented market interventions have not only prevented the global debt pyramid from crashing down, but they have also set into motion a renewed economic upswing (“boom”), which, however, has increased the world economy’s debt load significantly. From the end of 2007 to the third quarter of 2017, global debt has risen by almost 35 percentage points to 245 percent of global GDP.

How long can an inflation policy last? Mises answers:

Probably as long as people are convinced that the government, sooner or later, but certainly not too late, will stop printing money and thereby stop decreasing the value of each unit of money. When people no longer believe this, when they realize that the government will go on and on without any intention of stopping, then they begin to understand that prices tomorrow will be higher than they are today. Then they begin buying at any price, causing prices to go up to such heights that the monetary system breaks down.

It does not have to end this way, though. Inflation is a man-made policy, and it can be put to a halt at any time. Unfortunately, the support for ending inflating the economies is still pretty small — from academia, politicians, and the public at large.

The concern that it might be a currency crisis that could eventually bring down the fiat money system is by no means an exaggeration.

ORIGINAL SOURCE: How High Is The Risk of a Currency Crisis? by Thorstein Polleit at Mises Institute on 4/21/18