It was a headline designed for shock value. The title screamed, Investors Dumping SLV at Fastest Pace in 6 Years!

The headline came from Bloomberg, the epitome of “mainstream” news in my opinion. The article reported that investors were “dumping” holdings in SLV, the largest silver exchange-traded fund. They claimed the silver market had been “hit by a gale force, spurring an exit from ETFs backed by the metal.”

As you might guess, we do a lot of reading around here. And this was the first I’d heard of a “mass exodus” from SLV. Did I somehow miss this development?

It’s important, because if holdings in SLV were really cratering, it might be a sign that the market—or at least these types of investors—had changed their mind about silver. You might know that holdings in silver-backed ETFs have been stubbornly high for years, refusing to bow to any price pressures. During the crash of 2008, for example, holdings rose sharply in spite of the price falling off a cliff. Same thing happened in 2013 when the price cratered… holdings never really declined all that much, in spite of GLD shares dropping hard.

Given that, you might understand why I perked up upon seeing their chart. 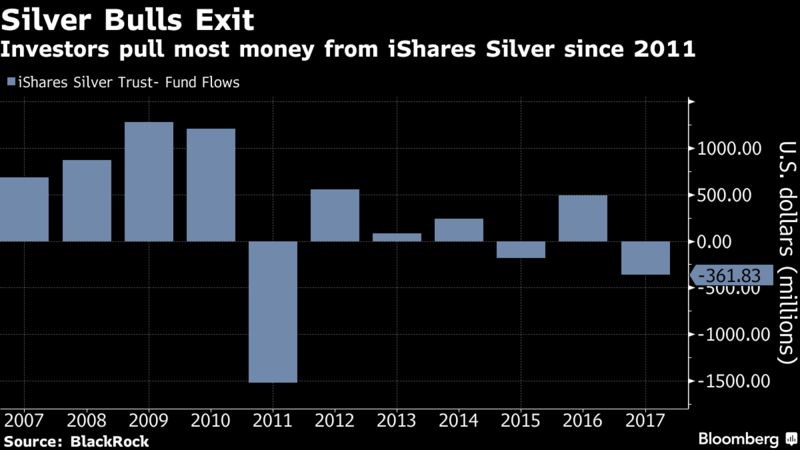 Looks ominous. I needed to check it out…

The above chart is correct. There have been outflows from SLV.

But the message the journalists portray is incorrect. We went directly to the SLV site and created a chart of the fund’s holdings. I expected to see a big drop over the past few months. Instead I saw this.

Okay, so maybe there’s been a big drop in the number of shares. Yeah, that’s probably it…

The number of shares has dipped, but they remain higher than they were 18 months ago. If investors were selling their SLV shares in droves, it’d show up here. It doesn’t.

The idea that investors are exiting the silver industry is simply not accurate. Silver has a message for anyone who thinks so: “The reports of my demise have been greatly exaggerated.”

In fact, if there is any message about silver right now, it’d probably be this: 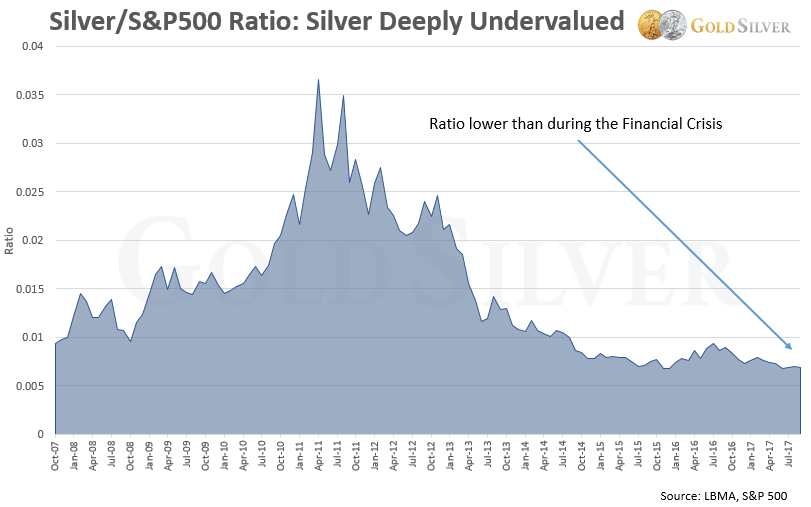 The ratio of the silver price to the S&P 500 hasn’t been this low in over a decade. Clearly silver is undervalued compared to common stocks. This chart screams “buying opportunity!” If you own common stocks and feel the pressure to lighten up, silver is one of the deepest value assets you can buy right now. Someday the ratio in that chart will look just the opposite, where silver is much higher and stocks are much lower.

And of course you can’t examine the silver market without looking at China. Here’s what was reported only a few days after that Bloomberg article:

The simple fact is, there is no “exodus” from SLV. Investors aren’t dumping the fund, nor silver itself. Demand for coins in North America remains subdued, but that’ll change abruptly once stocks, real estate, and other overpriced assets reverse. Nothing lasts forever, and once they start to fall, investors will turn back to precious metals in droves.

Mike and I and everyone else at GoldSilver are preparing for a major reversal back into gold and silver. We continue to accumulate, while prices are low.

Mothers, don’t let your kids believe every mainstream headline. Encourage them to get educated. And point out to them that monster boxes of silver Eagles won’t be priced under $10,000 much longer.

Futures Fall, S&P 500 Heads for Worst First Half in 52 Years

How Bad Were Recessions before the Fed? Not as Bad as They Are Now
More News