Valuations in the stock market are absurd right now. Historically overinflated. And in an environment with macro and political risk we haven’t seen in decades, bonds offer a pittance in interest vs. their risk profile.

Gold and silver are well positioned to thrive when this super-overheated risk asset bubble pops.

The Oracle of Omaha was quoted as saying, “long-term bonds are a terrible investment at anything close to current rates.” I can’t say that I disagree. The real yield on the long bond is essentially zero right now and if inflation picks up over the next three decades, as Buffett expects it to, it will quickly go negative.

But there’s another pair of observations Mr. Buffett has made in the past that should also be considered here. The first concerns comparing the value of bonds to that offered by the stock market: “Though the value equation has usually shown equities to be cheaper than bonds, that result is not inevitable:  When bonds are calculated to be the more attractive investment, they should be bought.” -Warren Buffett, 1992 Berkshire Hathaway Chairman’s Letter 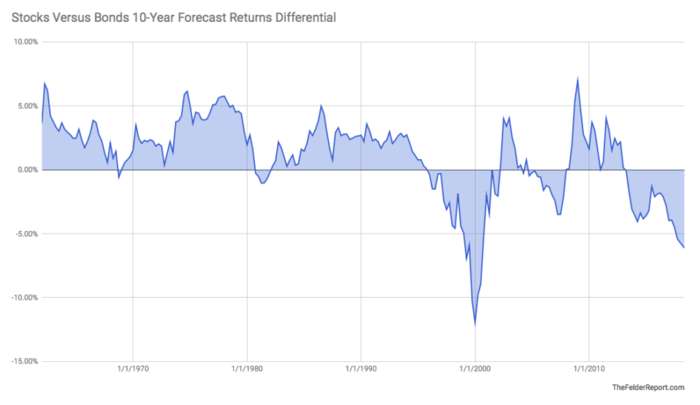 Bonds offer a static yield so their forward return, at least in nominal terms, is known but how do we determine what stocks offer over a specific period? Here is where his second observation comes in. A while back Buffett suggested the ratio of the total value of equities relative to the size of the economy as, “the single measure of where valuations stand at any given moment.”

According to the Buffett yardstick, stocks are currently priced to deliver an annualized return of -3% over the next decade including dividends. Compare this to the 3% yield on the 10-year Treasury note and you’re looking at a -6% differential.

And if inflation is, indeed going to make a comeback, as Buffett suggests, investors will want to make sure they limit their exposure to both kinds of financial assets. Additionally, they will want to ensure that they have adequate exposure to other asset classes, most importantly real ones.

ORIGINAL SOURCE: Warren Buffett Thinks Bonds Are A ‘Terrible Investment’ But According To His Own Methods Stocks Look Even Worse by Jesse Felder at The Felder Report on 5/16/18

ALL INflation as Nobody Expects Deflation