US stocks rallied on their open (S&P +20 to 2841) with gains in the Financials, Utilities and Real Estate sectors leading the advance.  An upbeat forecast on Amazon by Piper Jaffray and a further increase in oil (WTI to $58.97) supported the move.  The 10-year yield edged up to make a fresh intraday high at 2.334%, and the DX edged up to 97.79, helped by the pound sliding to $1.2647 (fear that leading candidate to replace May Boris Johnson said UK would leave the EU with or without a deal by 10/31) . Gold retreated in response, but found support at the overnight low of $1281.

Open interest was up 5.2k contracts, showing a net of new longs (outstripping the short covering seen) from yesterday’s $10 advance.  Volume surged with 414k contracts trading, which was inflated by some June-August rollovers.  The CFTC’s Commitment of Traders Report as of 5/21 showed the large funds slashing 22.7k contracts of longs and adding 13k contracts of shorts.  This was done on gold’s move down from $1304 to $1270, reflecting a heavy amount of long liquidation along with a significant amount of new shorts.  The Net Fund Long Position declined to 89k contracts, while gross shorts increased to 115k contracts.  In the past three sessions, there has been some significant short covering (most done during yesterday’s bounce to $1287) and new longs entering, adjusting the NFLP to around 110k contracts, and taking gross shorts down to around 105k contracts.  Even this adjusted NFLP remains historically low, and the level of gross spec shorts remains relatively high.  This leaves the gold market well positioned to recover higher as many longs remained sidelined and the still elevated amount of gross shorts - when forced to cover - will help accelerate any upside moves.

Some bulls were disappointed with gold’s meager $1 advance today, given the pullback in the US dollar.  However, other bulls will take today’s gain given rebound in equities and bounce in the US 10-year bond yield.  Bulls are still thrilled with gold’s ability to hold over the key support at $1275 (up trendline from 8/16/18 $1160 low) in the last few sessions. Bulls feel the move down from the $1304 high from early last week to the $1270 was overdone, and used the dip to get long(er) at more attractive levels. Despite Powell’s brush off of recent weak inflation data as transitory from two weeks ago, which was confirmed by the release of the FOMC minutes Wednesday,  bulls feel that the Fed’s dovish pivot has not been altered, and that market perceptions that the next move(s) will be a cut and not a hike are still intact – especially given the abundance of dovish commentary from the several Fed governors who have spoken in recent days, along with escalating fears that a protracted trade war will impede global growth (FedWatch has a 58.9% probability of a 25bp rate cut at the Oct FOMC meeting).  This they feel will keep US interest rates from climbing, keep the US dollar in check, and allow gold to probe higher.  Bulls also point to today’s Commitment of Traders Report (as of 5/21) that showed the large funds with a still relatively small net long position (89k), and a still relatively high gross short position (115k contracts).  Therefore, the bulls feel the gold market remains set up to move higher, as these shorts will provide fuel to further upside moves -  when forced to cover.  Bulls feel gold’s consolidation is over, and expect its rally to challenge initial resistance at $1287-89 (double top – 5/17 and 5/23 highs) followed by $1297 (100-day moving average).

Given the weakness in the DX, bears will take gold’s modest rise today.  However, some bears were expecting gold to remain lower today given the rebound in the 10-year yield and stocks – and were disappointed with the shallowness of gold’s intraday dips. While bears are still smarting from gold’s failure to breach key support at $1274 (up trendline from the 8/16/18 $1160 low) in the past few sessions, others remain patient and are using the subsequent rebound to get short(er).   Like the bulls were disappointed with the lack of conviction on the upside over $1300 a week ago, bears were similarly disappointed this week.  Perhaps market participants are concerned with the resolution key geopolitical issues (US-China trade, Iran, Brexit) before committing to more significant positions, or perhaps the dreaded summer doldrums have begun to settle in.  The bears applauded the slightly hawkish FOMC minutes on Wednesday, which echoed Powell’s less dovish tone from three weeks ago and feel that the prospect of an imminent rate cut is off the table now for at least the near / intermediate term.  They feel that this should remove downward pressure off of bond yields, and allow the US dollar to appreciate against other currencies, as they feel the dollar remains the “cleanest dirty shirt in the laundry basket”, with the US as the sole global growth engine. Recent soft data (including yesterday’s weak IFO and PMI data) for both Germany and the Eurozone that drove the German 10-year yield further into negative territory over the past two weeks underscores this view.  While derailed recently over fears that US-China trade talks are on the rocks, bears maintain that a deal is in both sides’ best interests, and are optimistic that an agreement will be put in place.  They expect the rebound in US equities seen over the past 5 months to resume (S&P made all time high on 5/1), putting further pressure on the yellow metal.  Bears expect gold’s pullback to resume, and will look for gold to close below $1275 (up trendline from 8/16/18 $1160 low).  Below this level, bears hope to trip significant long liquidation that they believe should lead to aggressive selling through $1269-70 (triple bottom - 4/24, 5/3, and 5/21 lows) and $1265-67 (5 bottoms - 12/25, 12/26, 12/27, 4/23, and 5/2  lows) to bring a test of the 200-day moving average at $1259. 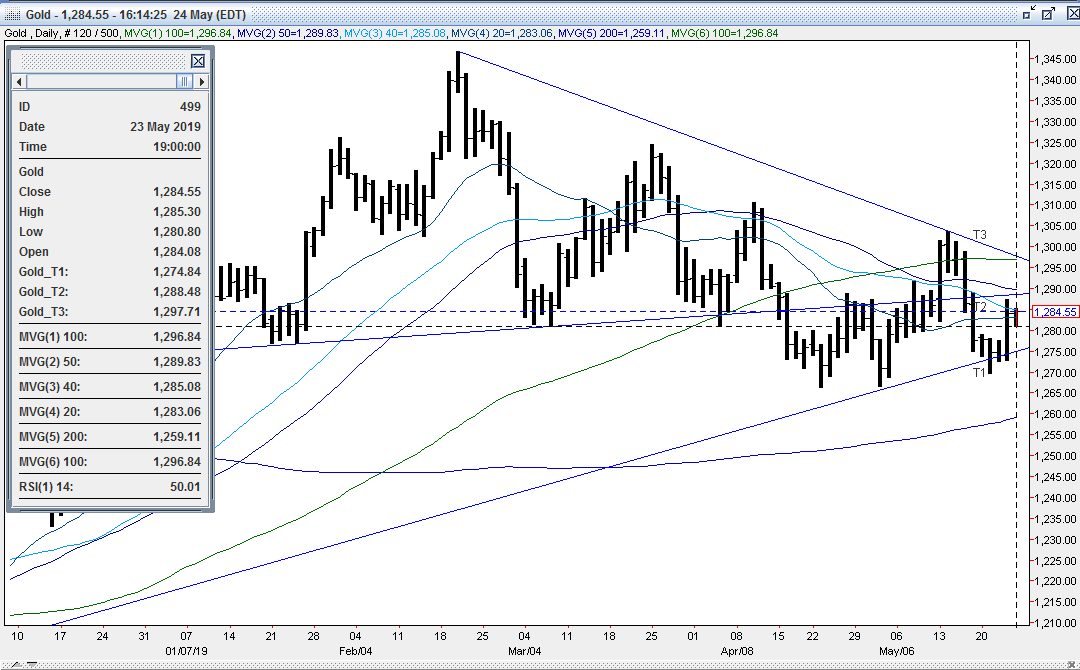 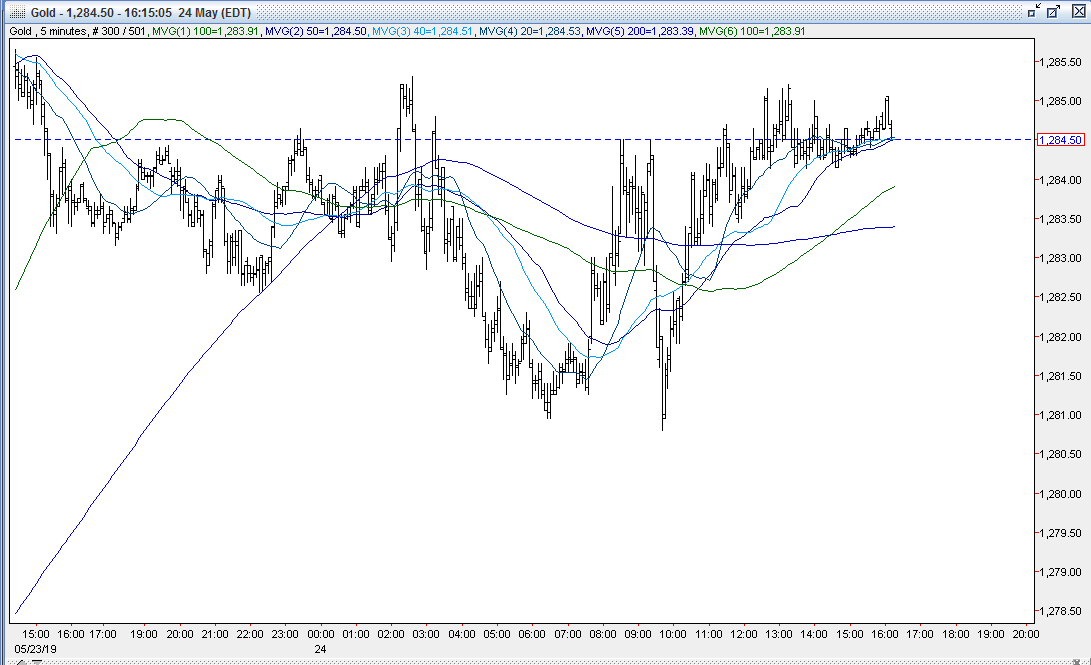 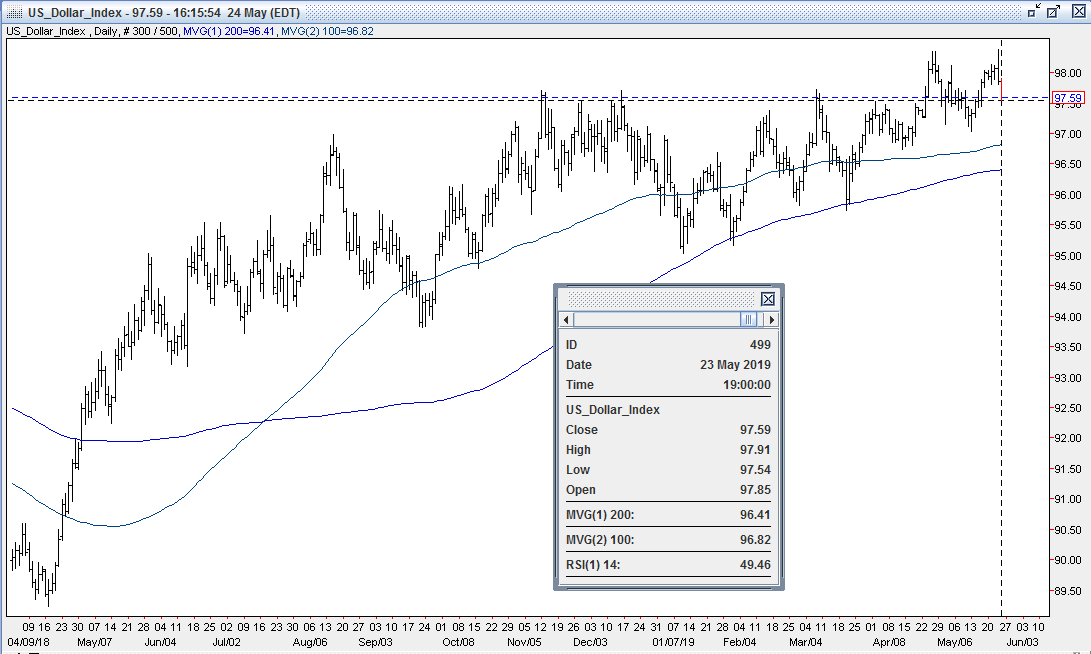 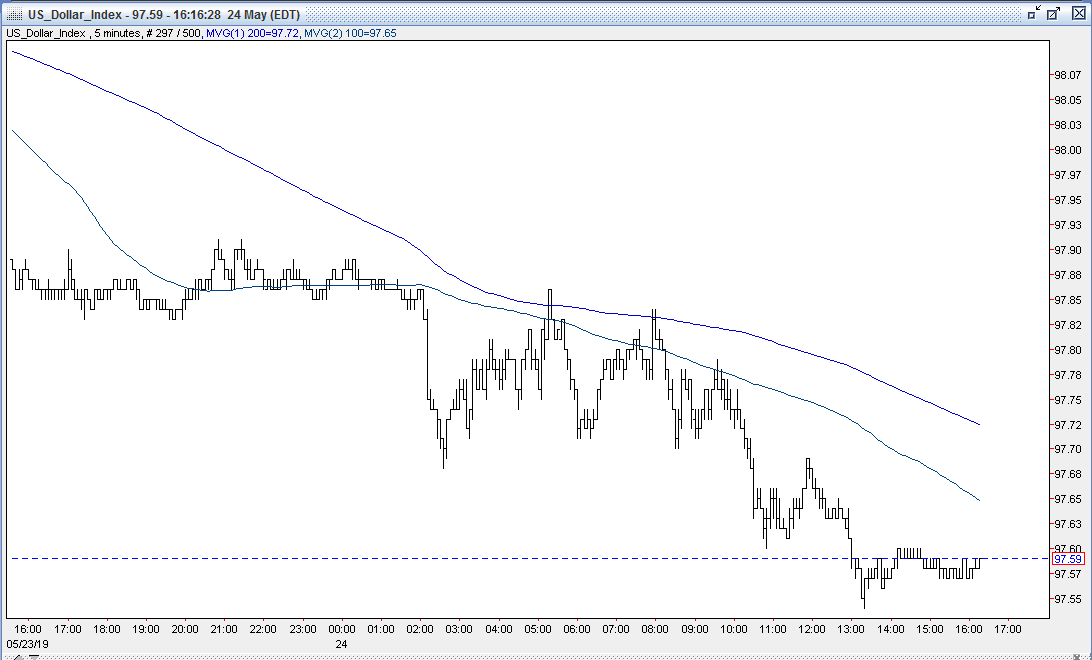