Does Gold's Breakout Mean Silver is on the Launchpad? Three… Two… One…

Gold and silver prices continue to push higher. They’re starting to get some attention from the mainstream, too.

A new uptrend in gold is clearly underway, but silver’s performance has so far trailed gold’s.

Let’s take a look at the price behavior over the past six-plus years of both metals to see if we can gain any insights about silver.

I plotted the annual trading range of the gold price since 2013, when most traders indicate the bear market in precious metals began. I also listed the dollar amount of change between the high and low each year.

Notice how the range has shifted higher this year. 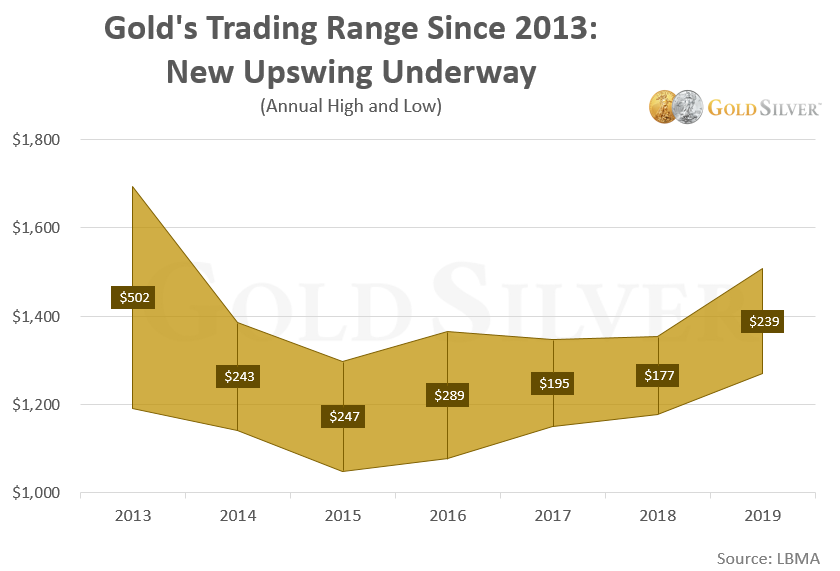 Gold’s trading range has shifted markedly higher in 2019. Not only has the price broken above the flat range of the prior three years, you’ll also notice a series of higher lows, a very bullish indicator.

This insight is perhaps more valuable than a simple line on a chart, because it shows that gold’s full price range — both the highs and lows — is trading higher.

The current surge will undoubtedly take a breather at some point, but this big-picture view clearly shows a decisive shift in momentum, one that portends higher and higher prices.

This shift, however, has not yet taken place with silver. 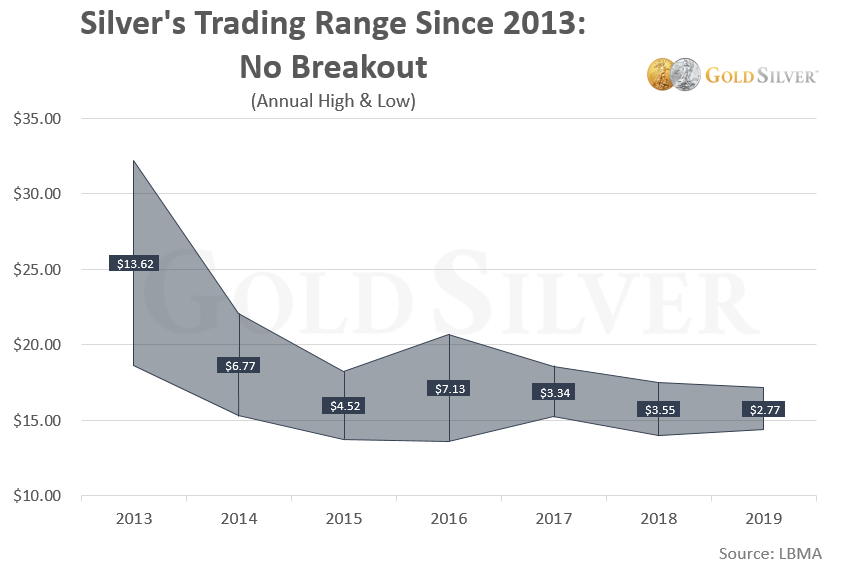 The lack of a breakout is further confirmed by silver’s tight trading range so far this year.

So, how much longer will silver investors find themselves sitting on the sidelines?

We’ve shown before that in past bull markets, silver usually trails gold in the beginning stages.

Here are gold’s five biggest bull markets since the 1970s, along with silver’s performance. You can see that silver usually starts off slower than gold. 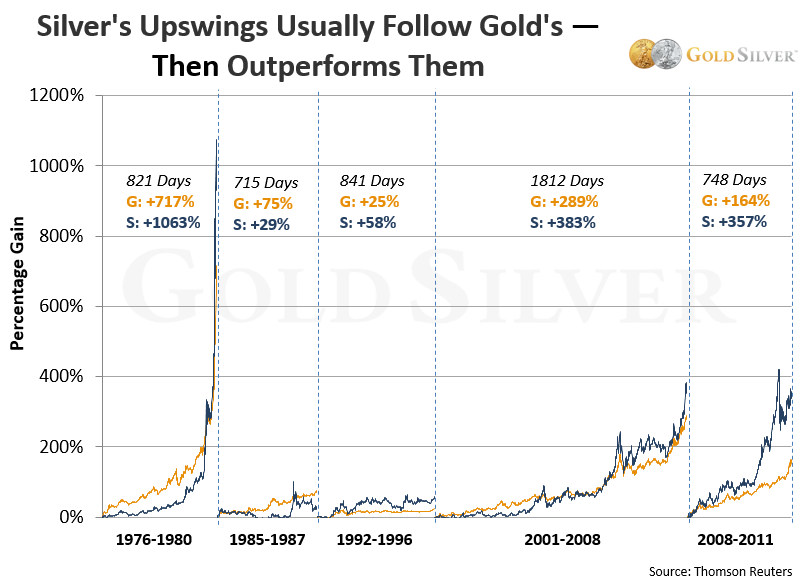 In three of the five biggest bull markets, silver clearly trailed the gold price in the beginning stages. In those cases, that lag lasted from several months to as much as several years. Silver’s behavior at this point is thus not unusual.

However, despite the slower start, you can see that in every case silver caught up and eventually passed gold’s total return.

In the 1992-1996 and 2008-2011 markets, silver did advance with gold and even jumped ahead of it fairly early in the trend, but in the other three bull markets it lagged until later. So we have historical precedents for silver’s current lag.

Silver has outperformed gold in every major modern-day precious metals bull market (though it did fall below gold before the mid-1980s uptrend ended).

With a breakout in gold underway, silver is likely next. Even if it’s not quite ready, our research says the coming explosion in silver is inevitable.

We encourage you to make sure you have the amount of silver bullion you want. The clock appears to be ticking for silver investors.