Kass: “Reject the Bull Market in Complacency and Derisk Now”

What a difference a couple months makes.

The same investors who were starting to pay attention to the underlying fragility of the economy and unsustainability of Fed policy in February, solely because markets were falling fast, are already completely complacent again.

It is the most misguided assumption: That current market prices are accurately indicative of the health and future robustness of markets. If the gas gauge on your car is broken and always shows a full tank, your belief that you'll be able to drive it for the next 10 years without a refill changes nothing but the degree to which you will suffer consequences in the near-term future.

The Bull Market in Complacency has resurfaced. Reject it and consider derisking, now.

I find myself, after a period of being long of equities, back in the bearish minority again – and I moved back into a net short exposure late in the day on Friday.

And, I observe, that many of the same investors who were bearish at the February lows are now bullish at the recent mid-May highs. Fear of a large drawdown seems to have been all but eliminated in the eyes and thoughts of market participants as the Bull Market of Complacency seems to have reappeared.

For the first time in 12 years the yield on the three month U.S. Treasury note now exceeds the dividend yield of the S&P Index: 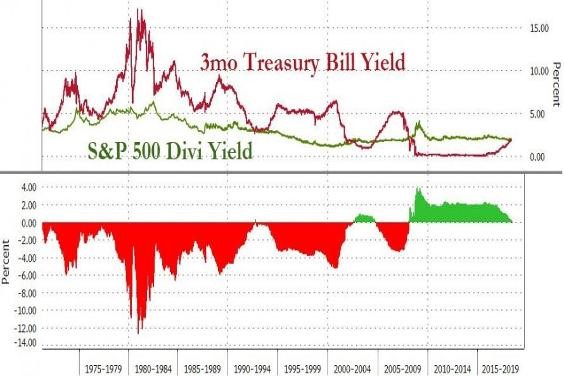 A tug of war between fiscal expansion and monetary contraction seems likely to be won by Central Bankers in the year ahead. History proves that the monetary typically wins out of the fiscal particularly since there are legitimate concerns whether the tax cuts will “trickle down” to the consumer.

Moreover, we are at a tipping point towards higher rates (in the U.S. and elsewhere) after nine years of interest rate repression in which the accumulation of debt in both the private and public sectors are at record levels. Not only has the Fed turned, but each day gets us a day closer to the end of ECB QE. (The Italian 2 year yield went from -.265% to -.10% in one day). So, risk happens fast when a massive bubble has been created.

ORIGINAL SOURCE: Kass: The Madness Of (Investing) Crowds by Doug Kass at Real Investment Advice on 5/15/18