Quotes, Gloats, and Anecdotes from the Silver & Gold Summit

I attended the Silver & Gold Summit in San Francisco November 20 and 21. It was great connecting with the many people I know in the industry, but I will tell you that a) attendance was low, and b) crypto promoters were out in force. It turned out to be more of a gold and crypto conference than anything else. Some of the more lively sessions were the gold vs. crypto debates, and one company offered “free bitcoin!” if you opened an account with them.

I talked to many exhibitors and speakers and attendees, and it seemed the first question on most investor’s minds was how high bitcoin will go, and when the bubble will pop—not if it will pop. Most seemed to believe bitcoin is in a bubble, with the only outstanding question how high the price goes.

But the low attendance and focus on an alternative asset reminded me a lot of when I attended a similar conference in the spring of 2007. Interest in gold was flat, the Dow was roaring, and uranium was the flavor of the day. Of course 18 months later the Dow was crashing, the uranium market was obliterated, and gold and silver were on the cusp of beginning a historic run-up. The “low interest” in precious metals ended up serving as a signal for one of the greatest buying opportunities. I have a feeling we’re at a similar juncture now.

Without further ado, here are some of the more interesting quotes, gloats, and anecdotes from the conference you might find interesting (for the most part I’m paraphrasing from my notes)…

Rick Rule, Chairman of Sprott Resources: “Gold’s biggest competitor is not bitcoin but the 10-year government bond, which is near the end of a 35-year bull market.”

Doug Casey, Casey Research: “Bitcoin is in a bubble, but it’s going to get bigger before it blows up.” Doug stated he has 7 figures invested in the stocks of crypto companies, but said he plans to sell out of most positions at some point. He also reconfirmed his view that gold will be the next great bubble, and gold stocks the next super-bubble.

Jim Rickards: “The shoeshine boy has said to buy cryptos: an elderly lady in a small coffee shop in my tiny New England town asked me if she should buy bitcoin.”

“I’ll never sell one bitcoin—ever!” Bitcoin newsletter writer. (I almost wanted to point out to him that the Nasdaq still hasn’t recovered from the tech wreck of the late 1990s.)

Cryptos panel, when asked for their short and long-term outlook for the market: most said crypto prices are headed higher in the short term (1-2 years) but not in the long-term (3 years or more), except the guy who said he’ll never sell a bitcoin.

Frank Holmes, Chairman of HIVE Blockchain Technology: “Most bubbles pop due to excessive leverage.” At this statement a few panelists pointed out that the CME is starting a bitcoin futures contract, which will allow both shorting and leverage.

Jim Rickards: “Cryptos will never replace gold. And government intervention is a certainty once they go after the terrorists and child pornographers that use them.”

“There will be no Merry Christmas if you don’t own gold, silver, and bitcoin. There will be a major disruptive event the first week of December, and that’s when a major shift into precious metals begins.” Bo Polny, Gold 2020 Forecast.

Rob McEwen, CEO McEwen Mining: ”A prolonged period of cheap money and the shift of investor focus to gold as a haven from geopolitical and financial risk could boost the price of gold to over $5,000 an ounce within five years—if that happens there is going to be a tsunami of money looking for a place to go.”

Bud Conrad, former chief economist of Casey Research: “The biggest buyer of US stocks has been the companies themselves—the stock market is a bubble.”

Bud’s not exaggerating. In fact, share buybacks have almost perfectly tracked the price of the S&P 500 for the past decade, until lately. 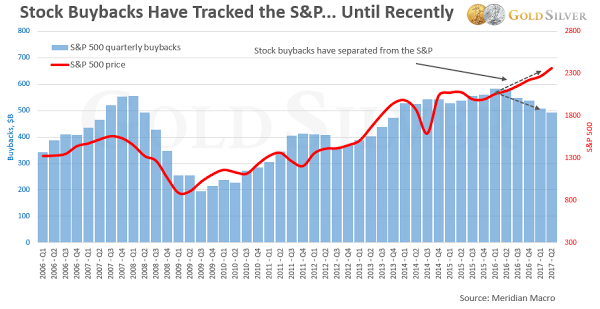 You can see that as buybacks have gone, so has the market. We think this is another sign that it’s time to lighten up on common stocks. (Full disclosure: I personally own no common stocks, except mining equities.)

I wasn’t a speaker, but here’s the gist of what I would’ve said if I was: “The only undervalued asset out there is gold and silver. Everything else is in a bubble. Gold and silver will ignite once any number of risks begin to materialize—and this time around the crisis won’t be mild. Investors will panic into gold and silver. Invest accordingly.”

If you missed it, you can now pre-order 2018 silver Eagles, what is likely the most undervalued asset in the global markets right now.