Silver at the Extreme: Lopsided Indicators That Cannot Last

The continual drubbing of the silver price has pushed a number of the metal’s valuation metrics to extreme levels. As you’ll see, conditions have gotten so overdone to the downside that a simple return to historical norms would result in a substantial rise in price; in the past, betting on silver under similar conditions as we find now has proven as powerful and predictable as the tide coming in. And if this cyclicality corresponds with the type of events Mike Maloney sees ahead, silver could be off to the races, on its way to three digits.

The data is compelling, and the investment ramifications obvious. As you scroll through the charts see what conclusion you come to…

Noncommercial silver traders are those that, for the most part, speculate on the short-term price of silver. Check out how extreme their current short position is: 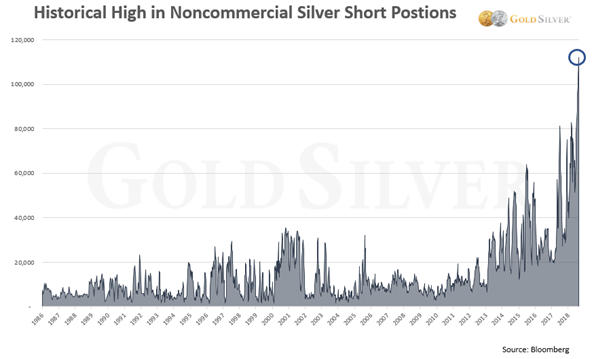 With an unprecedented short position, any significant reduction in those holdings (i.e., buying back the positions they borrowed to go short) could force the price higher. And it won’t take much to kick-start a short-covering rally. In particular, if the “strong” US dollar — what has been the biggest catalyst for weak precious metals prices — were to reverse, we could, as even the typically staid Bloomberg admits, “see an aggressive rebound in prices.”

It’s hard to find an asset class that is more hated than silver right now.

This chart from SRSrocco shows silver sentiment is at a record low: 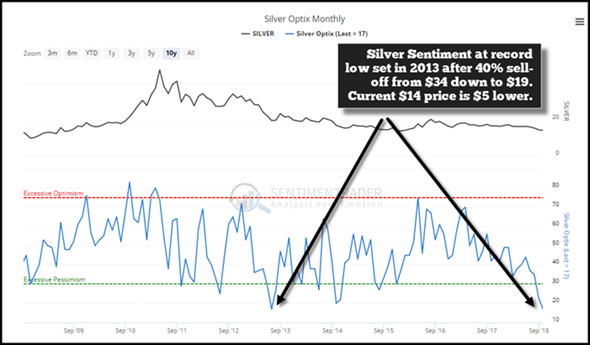 As the chart also points out, the current price is roughly 26% lower now than the last time it registered this reading.

Even a mild level of renewed interest in silver from mainstream investors would be enough to reignite the price.

The GSR just hit 85…its highest level in 27 years. Silver is “once-in-a-generation” undervalued according to this reliable metric:

And as most readers know, Mike Maloney views a GSR above 80 as a tremendous buying opportunity.

US Mint: We’re Out of Silver Eagles!

The US Mint announced a couple weeks ago that it was out of 2018 silver Eagles. Everyone knows demand has been soft for well over a year, so what gives?

Demand for silver Eagles did jump in August, and even though it was not a big month in the grand scheme of things (it wasn’t even the biggest month this year), it was enough to catch the Mint off guard. Here’s what that looks like: 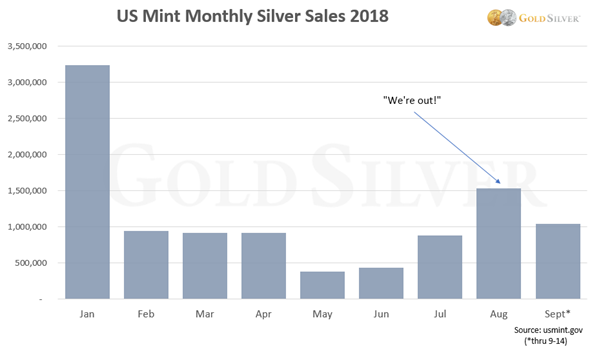 That increase in demand last month was enough to drain the Mint’s available inventory.

That’s not even the worst part. Because the availability of 2018 Silver Eagles was suddenly tight, premiums have risen. It's Economics 101: falling supply + rising demand = higher prices.

Here’s why this is important: If just a mild increase in sales can put silver Eagles on backorder, what happens in a genuine rush? And how high would premiums go? Mike and I both recall a dealer who for a short time in 2008 was able to sell Silver Eagles at a 90% premium.

So if you assume you’ll just buy when prices start to rise again, you could potentially find yourself in a situation where the metal is not readily available and be forced to pay a much higher premium than you would today. Why take that risk, especially when today we have both low premiums and low prices?

To be clear, this sellout is a temporary phenomenon, and the Mint does expect to resume production. It was mostly the result of their strategy to “adjust down” production in response to softer demand. Silver Eagles should be back online within a few weeks, once they have more blanks (though keep in mind we are dealing with a government agency).

But the reason doesn’t matter: those who wanted to buy new Silver Eagles were not only forced to wait for delivery but will have to pay more once they do become available (but not at GoldSilver: check out what we currently have in stock ).

Add it all up and here’s the current situation for silver:

This extreme situation in silver cannot and will not last. The data show the silver market is exceedingly overstretched, which implies that an upside reversal could be sharp and swift. A day is coming when you and I will no longer be able to buy silver priced in the teens.