Another financial crisis data point flashback. A Bank of America Merrill Lynch survey shows the same results as 10 years ago, as a sustained economic boom winds down and cyclical recession dawns.

By late 2008, investors believed that a late-cycle economy was giving way to a period of recession, as shown by the decline in the black line and ascendance of the red line.  By late 2009, a majority of investors began to describe the economy as early-cycle, as indicated by the ascendant green line. 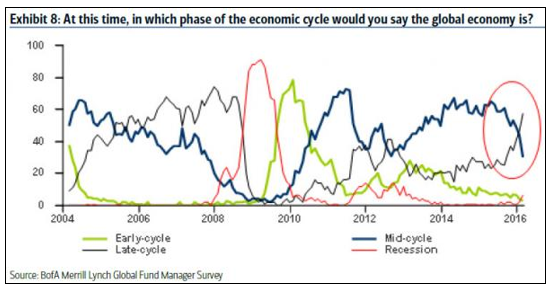 Summarizing, investors were largely correct in describing the state of the global economy in the years leading up to the recession.  They began to believe the economy had moved into late-cycle by 2005, a couple of years before the recession struck in December 2007.

Furthermore, investors seem to firmly grasp the sequence of the phases of the business cycle, as evidenced by the sequential peaks in the black, red, green, and blue lines during the period of 2007-2012.

ORIGINAL SOURCE: The Next Recession Is Closer Than You Think by Peter Cook at Real Investment Advice on 5/1/18