Why China Will Fall to the Same Fate as Former Economic Darling, Japan

Fortunately (or unfortunately, depending on your viewpoint), we know what happens when this occurs over a longer time horizon, as it has already happened in Japan. You end up with an economy that is dead in the water for decades at a time and a central bank that has to resort to ever-more-desperate means to prop everything up.

Japan has a 20-year head start on China, for example. And while Japan was once heralded as the next world economic superpower, it was done in by simple demographic math. Much as China will be done in by the same basic forces of productive supply and demand.

To see the future, sometimes you have to look to the past.  Japan is patient zero in the global epidemic of slowing growth and although Japan was assumed to be the emerging world power in the '80's, we now know better.  The title of emergent power now rests with China...and for the same reasons it didn't work out for Japan, it won't work out for China.

Below, the actual data as above versus the EIA IEO'17 forecast.  While the core population will fall at an even faster rate, the EIA forecasts energy consumption will stabilize (against all logical rationale)?!? 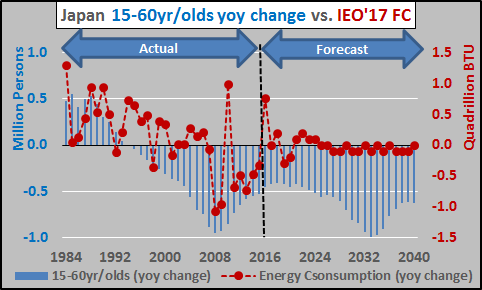 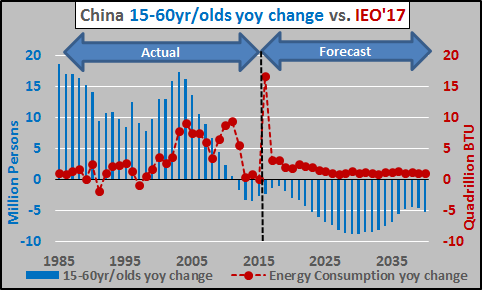 And perhaps the strangest forecast of all...Western Europe.  The declining core population and energy consumption inexplicably turn and begin rising...because?!? 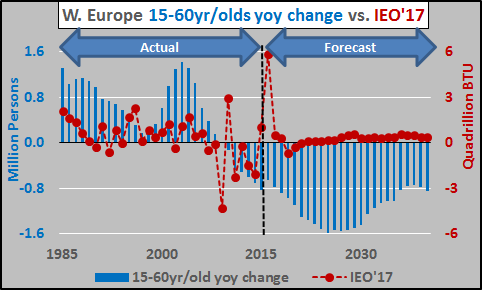 ORIGINAL SOURCE: What Patient Zero, Japan, Can Tell Us About China & The Developed World At Large by Chris Hamilton at Economica on 6/3/18