$14 Trillion Worth of Risk-Asset Buying Later, the Fed Has No Options

Today’s economic structure is entirely different than it was a scant 10 years ago. Truly reckless central bank money printing wasn’t even a thing in 2008.

But oh, what a defining binge it has been ever since. And now that the ‘pay the piper’ phase of this insanity is starting to begin, when more and still more debt produces less of the effects the Fed wants and more that it doesn’t, we’re staring down a coming crisis forewarned, but unarmed.

A recent report from the Brookings Institute highlights:

The era of growth fueled by macroeconomic stimulus, with no apparent adverse side effects such as high inflation, appears to be drawing to an end. In the absence of deep-rooted reforms to improve productivity, it will be difficult to ratchet up or even sustain high growth in the major economies.

Mounting public debt in the U.S. and other advanced economies, compounded by unfavorable demographics, and rising external debt levels of some emerging market economies are risk factors that also reduce policy space for responding to shocks. 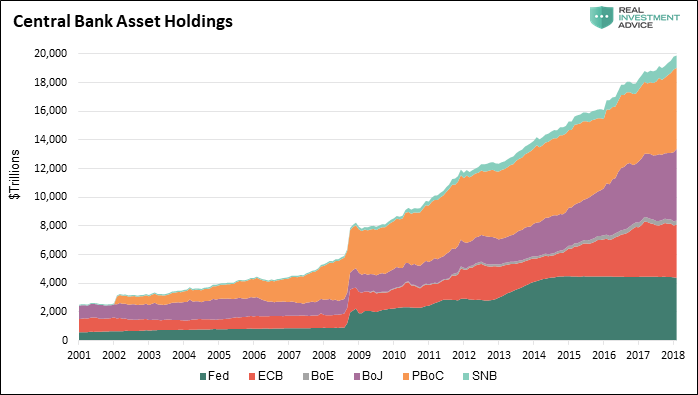 Global central banks’ post-financial crisis monetary policies have collectively been more aggressive than anything witnessed in modern financial history. Over the last ten years, the six largest central banks have printed unprecedented amounts of money to purchase approximately $14 trillion of financial assets. Before the financial crisis of 2008, the only central bank printing money of any consequence was the Peoples Bank of China (PBoC).

There are a multitude of risks on the horizon, from geopolitical, to fiscal to economic which could easily derail growth if policymakers continue to count on the current momentum continuing indefinitely. The dependency on liquidity, interventions, and debt has displaced fiscal policy that could support longer-term economic resilience.

We are at war with ourselves, not China, and the games being played out by Washington to maintain the status quo is slowly creating the next crisis that won’t be fixed with another monetary bailout.

ORIGINAL SOURCE: The Risk To Markets – Global Growth by Lance Roberts at Real Investment Advice on 4/19/18