20 Years Of Gold And Dollar Devaluation

President Nixon “temporarily” severed the weak link between gold and the U. S. dollar in 1971.  The link is still severed.

The economic well-being of most people and the sound dollar have suffered.  The dollar is no longer described as “good as gold” as it was 60 years ago.  Today we deal with mini-dollars and $ trillions instead of $ billions.

In the U.S., we view gold in terms of dollars, which often move inversely to each other.  Example: the dollar goes up a little, gold goes down considerably, or the dollar drops ten percent, and gold doubles in price.

The monthly dollar index compares the dollar to a basket of other devaluing fiat currencies backed by debt and dodgy promises.  Multiply that index by the monthly price of gold, and the result is gold with dollar variations mostly removed.  In other words: 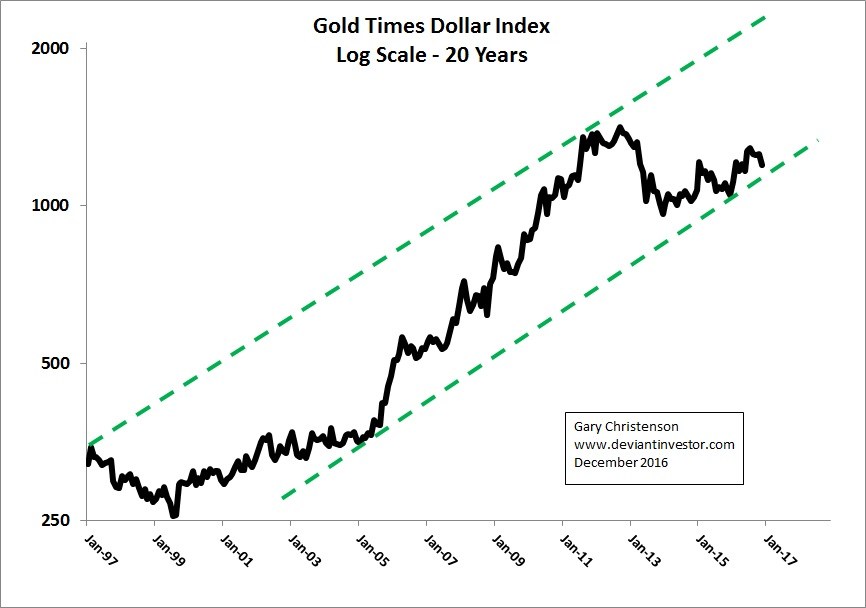 This log scale graph expresses the dollar index as a fraction slightly more-or-less than one.  Gold prices, with dollar variations filtered out have risen exponentially for two decades and are currently close to the bottom of the trend channel.

Why an exponential increase?  The short answer is exponentially more debt and dollars in circulation.  Dollars are borrowed into existence via the creation of debt (fractional reserve banking, QE, etc.).  The U.S. National Debt has increased exponentially at about 9% per year for over a century, dollars in circulation have increased similarly, and gold prices expressed in dollars are far higher now than the $42 when President Nixon did the deed.

Examine the same data after it has been smoothed with a 20-month moving average and note the projection in about ten years.

For perspective on debt and currency in circulation, examine 44 years of national debt plotted every presidential election year. 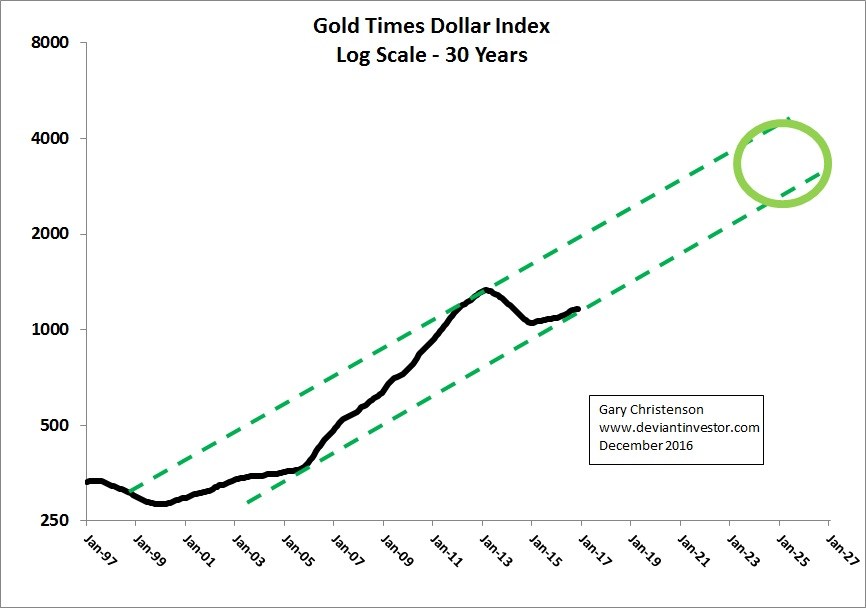 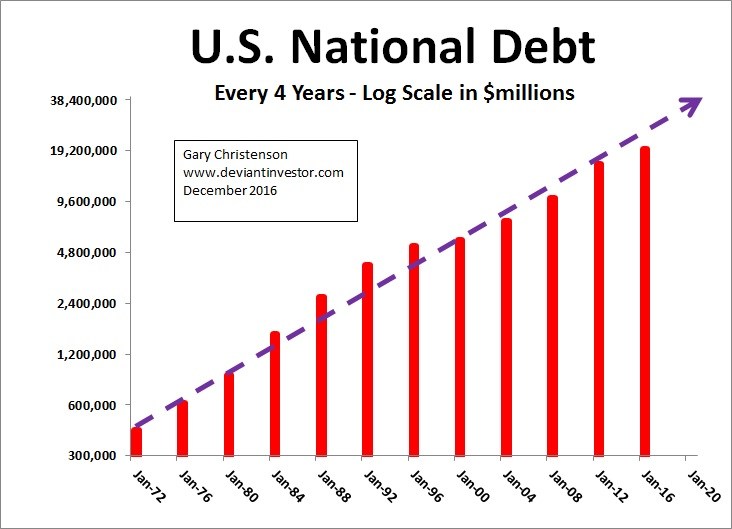 The national debt will increase unless you believe that politicians want to spend LESSmoney in the future.

The reserve currency status of the dollar is vulnerable. The euro and the pound are weak but eventually the miserable fundamentals for the dollar will manifest as a weaker dollar versus most other fiat currencies. Confidence in the U.S. government and the dollar could weaken considerably. The dollar could fall hard and rapidly if/when global oil is regularly purchased in other currencies and if/when Russia or China issue a gold-backed currency. It seems likely that all paper currencies will continue their slow or possibly rapid march toward a value of zero.

Suppose the dollar index drops to its low (or far lower) from the past three decades – about 70.

The trend channel shows a smoothed target of about 4,000.  With a dollar index of 70 (0.70 as graphed), the smoothed price of average gold could be about $6,000. A spike higher could easily double that price – well over $10,000 without considering expanded wars, hyperinflation, loss of reserve currency status etc. Imagine $10,000 gold within the next decade. How about multiples higher if confidence in the dollar crashes or our leaders cause or allow hyperinflation?  Hyperinflation will create a difficult world for almost everyone (think Zimbabwe, Argentina, and Venezuela) but that does not mean it can’t happen in the U.S. or Europe.

I suggest the scenario for “more of the same or worse” is most likely.