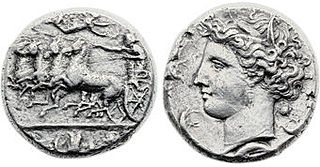 ZURICH(BullionStreet): An ancient Greek silver coin belongs to the decadrachm of Acragas is expected to be the most valuable item in an auction to be held here on Oct 17.

The ancient Greek coin estimated at an eye-watering $ 1.8 million is not only exceedingly rare, but also of the greatest historical importance.

Art collectors from around the world will compete for hundreds of well-pedigreed ancient Greek and Roman coins from two famous collections offered by the Zurich-based firm Numismatica Ars Classica.

The combined estimate of the 411 coins offered amounts to over 6 million Swiss Francs ( $ 6.3 million). The masterpiece decadrachm of Acragas was struck at a time of great turmoil in Sicily, just prior to a Carthaginian invasion in which Acragas itself was virtually destroyed in 406 B.C.

When sold back in the Sotheby’s auction of the Hunt Collection in 1990, this coin realized the record price of $ 572,000, a record that was not exceeded for more than 10 years.

Today, it is widely accepted to be the most important and prestigious Greek coin in existence and will undoubtedly reach a new record price paid for a Greek silver coin.

The coins will be offered in two separate auctions. The first, Auction 66, contains 84 ancient Greek coins highlighted by many pieces once owned by oil tycoon Nelson Bunker Hunt and formerly auctioned by Sotheby’s in 1990 and 1991.

The Nelson Bunker Hunt collection, long celebrated as one of the finest and richest collections of Roman and Greek coins ever assembled, has acquired almost mythical status.

This pedigree will no doubt add to the attraction of the coins, especially in this age when provenance is very important.

The other Greek coins in the sale are gold and silver pieces ranging in date from the 6th to the 2nd Centuries B.C., struck throughout the Mediterranean world, from the Iberian peninsula to Babylon and Egypt.

The Roman gold of Auction 67 covers more than half a millennium, from 46 B.C. to A.D. 476, and is supplemented with 16 gold coins of the Byzantine Empire struck as late as the 9th Century A.D.

Most bear portraits of the issuer, a hallmark of coins of the Roman Empire. Highlights include a gold coin bearing the heads of Julius Caesar and his nephew Octavian, best known as Augustus, Rome’s first emperor.

Over the last two decades, Numismatica Ars Classica has auctioned some of the most prestigious and valuable collections of Greek and Roman coins in the world.

How China Overtook the U.S. as the World’s Major Trading Partner

Yes, Rates Are Still Going To Zero, The Fed is trapped...

ECB to Launch Review That Will Redefine Its Mission and Tools

Pentagon Racks up $35 Trillion in Accounting Changes in a Year

Fed May Tighten in Second Half 2020 If Inflation Quickens: Minerd

If Stocks Are ‘Ridiculously Cheap’ Why Isn’t Warren Buffett Buying?