As Volatility Spikes, Here’s What Could Be Ahead for Gold and Silver

The shift from low to high volatility in the markets is on. And almost by default, that’ll include gold and silver, since they’re inversely correlated to stock markets most of the time.

It’s more than just a daily phenomenon, though; any prolonged wave of uncertainty that hits the markets will push investors into gold. What’s happening on a small scale now will play out on a much bigger scale when sentiment shifts, especially in regard to our monetary system.

And when gold and silver volatility really ratchet up, it’ll be a lot of fun, as you’re about to see.

First, here’s a snapshot of the daily price movements in gold and silver since the year the last bull market peaked: 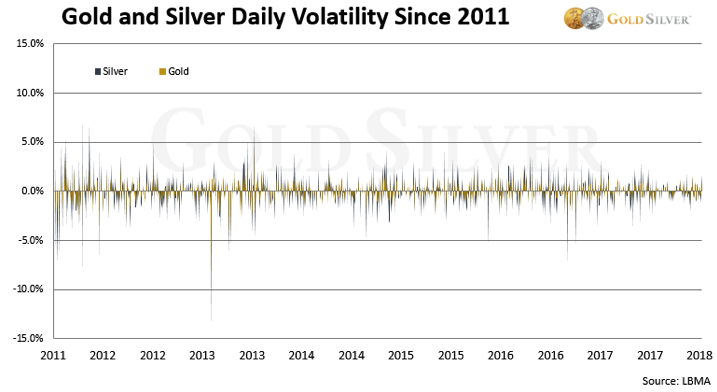 A few things stick out. You’ll first notice that gold and silver have rarely had a daily move greater than 5% over this time period. Further, volatility has decreased. Prior to 2018, gold’s average daily movement was 0.5%, and silver’s 0.8%. For the first three months of this year, however, those averages were almost halved.

But silver is not always more volatile than gold. In the chart above, silver's price movements were bigger 71.5% of the time—meaning gold’s were bigger 28.5% of the time. And the two metals don’t always go the same direction; gold rose 0.26% on December 2, 2008 (not shown), while silver declined 5.05%.

Exceptions aside, silver will continue to be more volatile than gold, especially on days when developments impact the markets unexpectedly.

So, if volatility really starts to ratchet up, what kind of levels might we see?

The best example comes from what has been, so far, the greatest precious metals bull market in modern history.

The following chart shows the daily price movements of gold and silver from January 1971 through December 1980. Check it out. 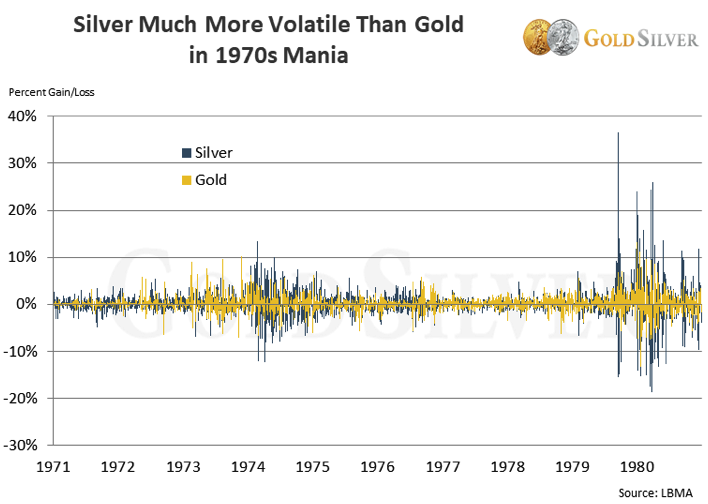 The chart is a tad crowded, but you can see that volatility spiked in 1974 and 1979/80. These were periods when investors piled into precious metals, the historical message being that another rush in the future would lead to similar volatility.

On average, silver moved 1.4 percentage points more than gold during the decade. What’s interesting, though, is that silver logged bigger one-day movements only 63.5% of the time. So gold moved more sharply than silver roughly one-third of the time.

Here’s another compelling fact. When the market entered the mania, silver's volatility increased at a more rapid pace than gold’s. From 1979 through the end of 1980, silver outperformed gold by an average of 2.4 percentage points, almost double what it did before the mania set in.

There’s no doubt in our mind that this level of volatility—and silver’s dramatic outperformance over gold—will repeat in the next big run-up in precious metals.

Based on the historical record, there are clear investment conclusions we can draw:

The future will indeed be very fun for those of us that have meaningful exposure to gold and silver. In preparation, Mike and I continue to accumulate. Here’s what I just bought.