Bid Farewell to Pennies and Nickels! 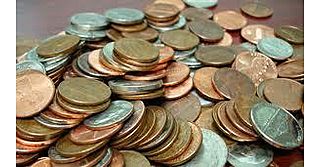 The penny has run out of luck, both in Canada and in the United States. Back in March, the Royal Canadian Mint announced that they were phasing out the penny due to “low purchasing power and rising production costs”, according to CBC News.

Canada was pigeon-holed into this decision after the penny decreased to 1/20th of its original purchasing power, becoming an unnecessary “burden on the economy.”

The U.S. is following Canada's footsteps regarding the production of pennies and nickels. According to U.S. Treasury Secretary Tim Giethner, our U.S. Mint intends to remove the penny and nickel coins from circulation beginning early in January 2013.

The Mint currently spends about 4.8 cents per penny due to the rising costs of zinc and copper. A nickel valued at five cents now costs approximately 16.2 cents to make due to inflated nickel prices.

In comparison, the dime and the quarter are much more practical forms of coin currency. The dime only costs about 9.2 cents to mint and the quarter checks in at 21.31 cents. However, due to continued inflation expected in 2013, Giethner has warned that the dime may be in jeopardy of extinction as well.

The year 2011 marked the sixth consecutive year that pennies and nickels cost more to produce than they were worth in the market. In fact, the Mint posted a loss of $187.7 million last year – more than triple the losses recorded associated with coin minting in 2010.

Most Americans are more than ready for this overdue phase-out, viewing the millions wasted on coin production as foolishness in these tumultuous economic times. As federal budgets grow tighter and tighter, this is the only logical thing to do, but it will have some unintended consequnences on the average consumer...

Although the days of pennies and nickels are numbered, they will still be accepted in cash transactions. Meanwhile, merchants are preparing to round all transactions to the nearest ten-cent increment, meaning that consumers may be paying a few cents more than usual in the near future.

All Things Being Equal: NorthmanTrader

Consumer Facing Companies Will Be First to Take a Hit Across the U.S.

The Most Splendid Housing Bubbles in America, Feb. Update

Pandemic Bonds Were Designed to Fail and They Just Did