When price performance of anything, but it a stock, bond, house, or precious metal, doesn't align with fundamentals as you see them, one of two things is true. You're wrong about the fundamentals or you have haven't waited long enough for the market to correct the mispricing.

It always does. Eventually. And that's the giant 'X' factor. Nobody knows exactly when that will happen, only that it will.

Peter Lynch, who crushed S&P returns for years as a portfolio manager at Fidelity, once said "All stocks are fairly priced. Just not today." It is these mispricings that bring opportunity, and your only job is to accumulate them and wait.

Some silver bulls lacking patience are being driven mad by its seemingly interminable sideways pattern, yet you shouldn’t be, because the continuing sideways movement allows more time to build a portfolio of silver investments ahead of the major bullmarket that we know is incubating.

Right now it is being held in restraint like gold, by the dollar rallying, but that won’t carry on forever, and as is the case with gold, the dollar may be rallying against most other currencies, but they are all spiraling the drain. 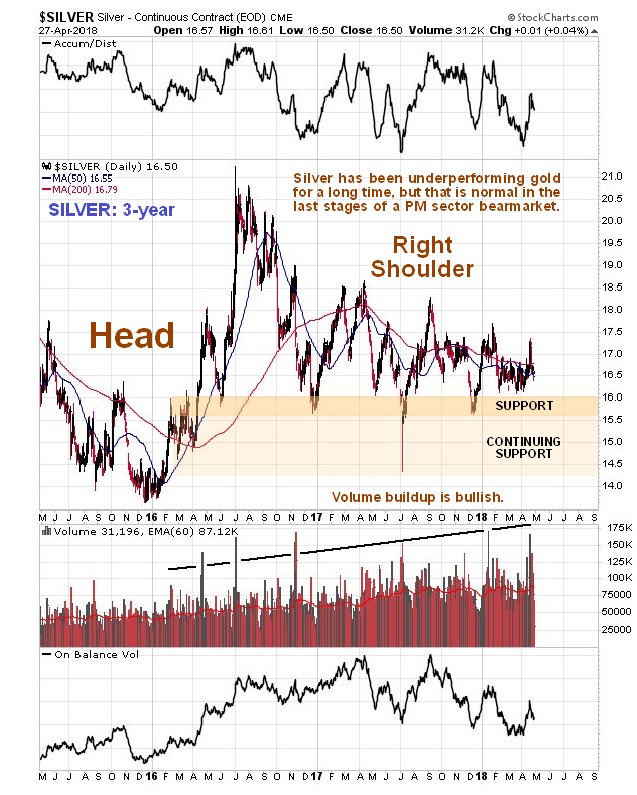 Like gold, silver has marked out a giant Head-and-Shoulders bottom pattern which is fast approaching completion, but it is less obvious than gold’s because it is downsloping, which is normal because silver tends to underperform gold towards the latter part of bearmarkets.

We can see this on the latest 10-year chart below. Most investors won’t touch it with a 10 foot pole, because it has been too low for too long – they are attracted to high and rising prices, not to things that are depressed and cheap.

One guy wrote me in a somewhat hysterical state because I had recommended silver saying “You said it was going up and two days later it dropped!!” so I replied “Listen, Buster – you are never going to make any money with an attitude like that – me, I’m a believer.”

Before leaving the 10-year chart, another point to note is that, like gold, we have seen a steady and pronounced volume buildup in silver for over 2 years – since the final low of the Head of the Head-and-Shoulders bottom late in 2015 and early in 2016.