Correction! It Takes Even FEWER Ounces of Gold and Silver to Buy a House

We update our charts every year on how many ounces of gold and silver it takes to buy a house in the US. It’s an exciting thought, to potentially be in a position to buy a home with just your stash of bullion, a possibility that seems increasingly likely given the bloated nature of the housing market vs. low gold and silver prices.

However, after reviewing the latest update, Mike Maloney thought it looked off—and after some digging we discovered what it was.

It’s not an error, but in past charts we used the “average” US home price, and Mike wanted to look at the “median” home price instead.

Why median instead of average? Here’s a simple example…

Median, on the other hand, is simply the price at which half the numbers are above it and half the numbers below it. Median is the “middle” of all the values. Average and median can be similar of course, but if there are more values at one end, or a few extreme values, that can make the “average” value misleading.

And that’s exactly what we have with home prices. Because some homes are exceedingly expensive, it pushes the average price higher. But the median price, the middle value, is more accurate, especially for the middle class.

And that little change makes a fairly big difference…

Our recent article showed that it took 85.1 ounces of gold to buy the average priced home in the US at the peak of the gold market in January 1980.

But based on median home values, it actually only took 74.9 ounces. 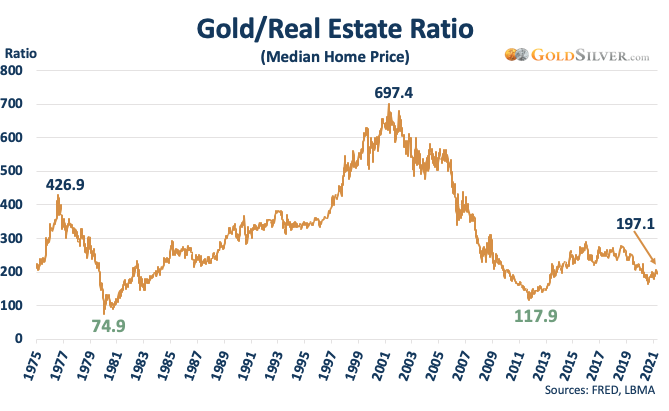 That may not seem like a big difference, but consider that at current gold prices it represents an investment today of over $18,000! That’s how much less you have to spend now if the ratio returned to its 1980 low.

All the values are lower using the median price; it took 231 ounces to buy an average priced home last month, but only takes 197.1 for a median-priced home.

As usual, the difference with silver is more significant. It took 1,464 ounces to buy the average priced home in the US in January 1980, but to buy a median priced home it only took 1,288 ounces. 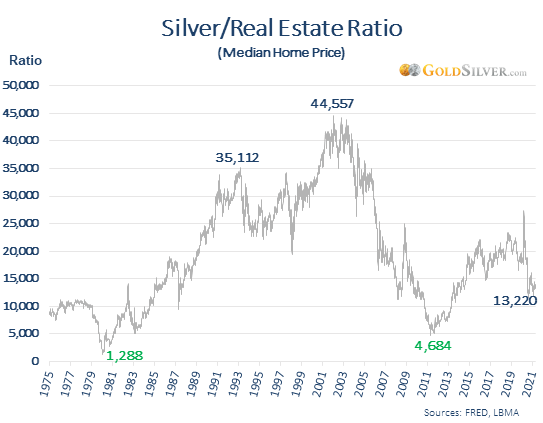 As with gold all the values are lower using the median price. It took 16,056 ounces last month to buy an averaged priced home, but just 13,220 for a median home, a difference of 2,836 ounces, almost 6 mint cases.

In other words, buying a home with gold and silver may indeed be more affordable than we reported. If you think you might someday want to swap some or all of your bullion for a house, it could take even fewer ounces than we thought.

The difference here may be immaterial to some of you. But we wanted to pass it along because if we’re right about the direction, a home could be even more affordable than we realized, especially when it comes to silver.

In fact, if Mike is right about what’s ahead, it’s possible we could see that ratio fall to just 1,000 ounces of silver.

Imagine being able to buy a house outright with just two mint cases of silver Eagles or Maples Leafs (before taxes). Or if you own a lot more silver, an entire city block of real estate… or a beachfront paradise… or a working farm.

I don’t know about you, but I think I’ll buy some more silver! Here’s what I'm buying.