Nowhere to run, nowhere to hide. The Fed is in a pickle.

Titanic debt levels can’t withstand much higher rates without waterfall defaults crushing the economy. Inflation demands that rates get raised, more, faster. What is the solution when you have to raise rates into a market that can’t withstand rates getting raised?

There isn’t one, of course. So you get a lot of jawboning, a lot of the Fed trying to talk its way into making everyone believe everything is just great, that all of this is going according to plan, never mind what anyone else says. The jig is almost up. Raise rates, cut rates, leave rates the same. It’s pick your poison time for Jerome Powell and friends.

Never has the world been this indebted. To think this massive debt burden won’t affect the economy’s sensitivity to rate hikes is just naive.

Rates at the front end of the curve have risen, but instead of the whole shifting higher, the long-end has fallen in yield. Stop and think about that development. 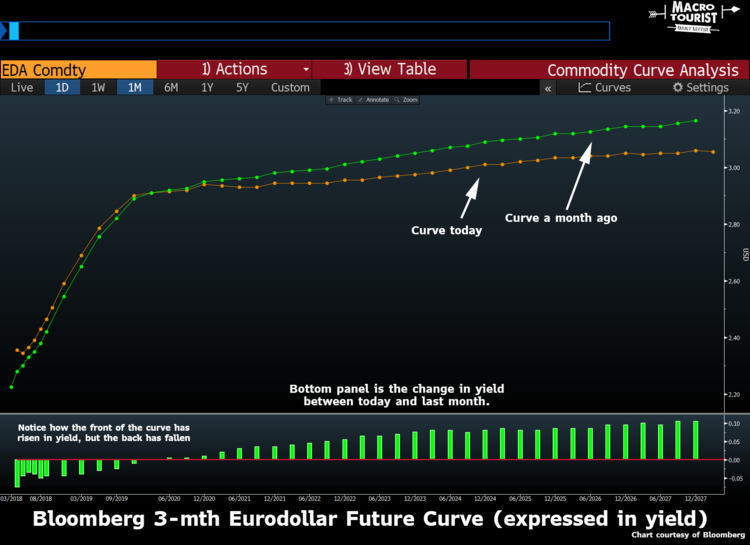 Although we are miles away from being inverted as the front part of the curve is still relatively steep, the market is sending signals that the end of the tightening cycle might be in sight.

And make no mistake. The market will know before any Federal Reserve official. There is no better signal than the yield curve.

Don’t ignore the shot across the bow that this recent flattening of the LIBOR curve is flashing. The current economic cycle is already one of the longer ones on record, and even though the Federal Reserve has been slow in raising rates, it might take fewer rate hikes than in previous cycles.

Don’t bother arguing with the hard-money gurus about the correct policy course. Just watch the yield curve. The market is smarter than all of us.

ORIGINAL SOURCE: NO BETTER SIGNAL THAN THE YIELD CURVE by Kevin Muir at The Macro Tourist on 4/17/18